Ryback opens today’s show by talking about the Greatest Royal Rumble. He points out that it was a lengthy event, but it featured a lot of great wrestling. It’s not one of the big PPVs, but they had to bill it as if it was one because they were being paid a lot of money by Saudi Arabia. In the end there were no Title changes and this show was basically an expensive live event.

Ryback is happy for Bray Wyatt, who has found success in teaming with Matt Hardy. He’s interested to see where they go from here creatively. He notes that Triple H and Cena seemed to be winging it for most of their match, noting that those guys probably only planned a finish before going out to the ring. He thought it was a great match and he enjoyed seeing those two guys working with each other and calling it on the fly. 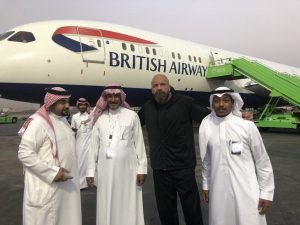 He notes that Titus O’Neil’s slip was hilarious, but he’s glad Titus is okay because he barely missed hitting the steel beams that are under the ring. Ryback notes that if Titus hit his head on one of those beams he would have been knocked out for sure. He notes that Titus handled the entire situation great because there’s no choice but to laugh in that instance.

However, from a work standpoint Ryback says he’d be furious that WWE showed multiple replays of the slip because that’s a reflection of his standing in the company. He points out that the company wouldn’t show replays or highlights of that fall if it was Steve Austin, for example.