Lawler is joined on today’s show by his co-host, Glenn Moore, and Jim Cornette.

Cornette opens the show by speaking about Lawler’s recent stroke. He urges Lawler to stop scaring us all with these health scares and Lawler laughs, noting that he hasn’t been doing it on purpose. Cornette adds that Lawler has kicked out from death a few times now, and it’s just incredible how he’s been able to recover from these cardiac events.

Cornette mentions that he was terrified to hear that Lawler had worked a recent match with Joey Ryan, who he’s had issues with in the past for the way he works wrestling matches. Cornette points out that some other very credible names like Mick Foley have recently worked with Ryan and have taken the “dick flip” spot, and he doesn’t know why these individuals sink to Ryan’s level. He assumes they just feel bad for Ryan. 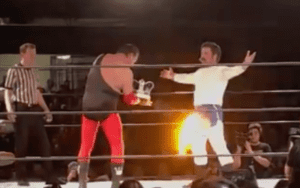 When he heard that Lawler was working a match with Ryan, Cornette was annoyed that Lawler would even consider getting beaten by a penis. Lawler informs that when he showed up to the building that day he had no idea who he was going to work with, but when he arrived he was told he’d be wrestling Joey Ryan. Lawler immediately made it clear that he wouldn’t be taking the “dick flip” spot, especially since he was just recovering from a stroke.

The promoter had no issue with this, and asked Lawler if he could come up with any creative ways to work with Ryan. Lawler came up with the idea of shooting a fireball at Ryan’s penis, after Ryan spent some time portraying the Andy Kaufman character who Lawler worked with in Memphis decades ago. The spot went over perfectly and the audience loved it. After the spot the audience even chanted, “6-star match”.