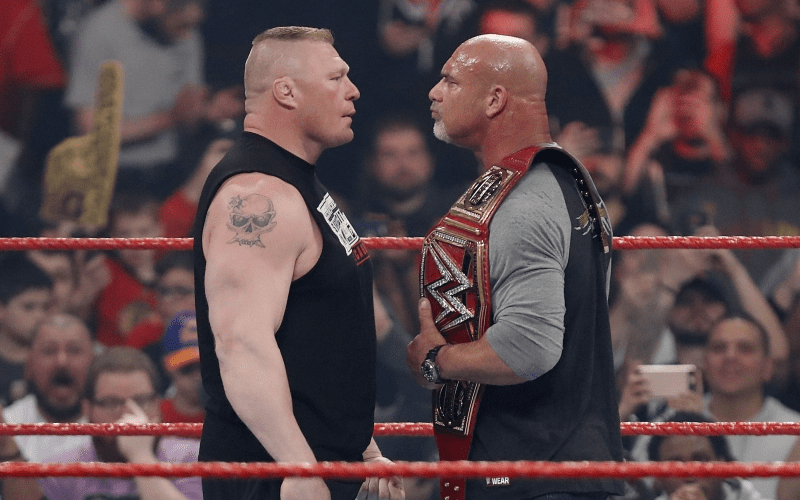 In a promotion interview with Sports Illustrated for his new History Channel show Forged in Fire, Bill Goldberg spoke out on his most recent run with the WWE and how it topped off with him headlining the 2018 Hall of Fame class.

Bill took that opportunity to give special mention to his longtime friend/rival Brock Lesnar for inspiring him to return to the ring, and showed immense gratitude to the current Universal Champion for giving him the care and respect necessary for them to work together.

If it wasn’t for Brock, it would not have happened. Period, end of story. I know it’s hard to believe this, but Brock is a caring person underneath all that big giant monster’s body. The relationship he has with his sons parallels my relationship with my son, and I think Brock may have understood what I was going through. Maybe he put himself in my position, saw a little bit of himself later in life in me, and saw how much this meant to me. For that, I can never repay Brock.

Two things from this:

-It’s amazing to see the progression of Bill Goldberg. He use to hold such a bitter taste in his mouth regarding this business, but now he genuinely seems happy with his past and present in sports entertainment. Being able to wrestle for his son was a big deal.

-Lesnar still gets a lot of criticism for “not caring” very much. I personally think that Brock is still exciting to watch because everything seems important when he shows up. He’s the WWE’s final boss, the big baddie that eventually needs to be dethroned, but some of that aura that he once possessed does seem to be missing, and I do believe it’s because Brock isn’t as invested as he once was. Hopefully, some time in the UFC will make him eager to return to the squared circle once again with some heart.