Ryback opens today’s show by mentioning that he met Goldberg for the first time this past weekend. He says Goldberg is a nice guy and he’s glad he came over to say hello. He notes that neither he or Goldberg were fond of the comparisons that many fans made between them back in the day, but he sort of regrets the initial interview he did back then when he addressed the comparisons.

He implied at that time that he considered himself to be a better athlete and loved the business more than Goldberg, and looking back now he thinks he could have handled those comments better.

Getting into his thoughts on WrestleMania, Ryback congratulates Naomi for winning the first ever Women’s WrestleMania Battle Royale. He’s very happy for Naomi and says she’s a great person who’s very deserving of all the success she’s had. However, he notes that the crowd really bit when Bayley eliminated Banks and it appeared she had won, and then when Naomi won the crowd seemed let down by that. 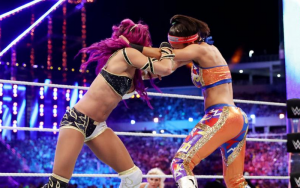 Ryback note that Charlotte and Asuka had a great, physical battle. He notes that Charlotte winning was a big surprise and nobody expected that, so that was a good thing. He also adds that Charlotte has worked her ass of to get to the spot she’s in today, and this win was a very big notch in her belt. Ryback thinks Asuka’s streak ending will actually give her more options creatively and might be a positive thing for her down the line.

Ryback thought Rousey looked great in her WrestleMania debut and he thinks she’s only going to get better as she finds herself in different situations in the ring over the next few years. He points out that the mixed tag match was mapped out pretty well for her which certainly helped her in her debut, but she looked great nonetheless. He was also very impressed by Triple H’s physique, noting that he looked shredded.