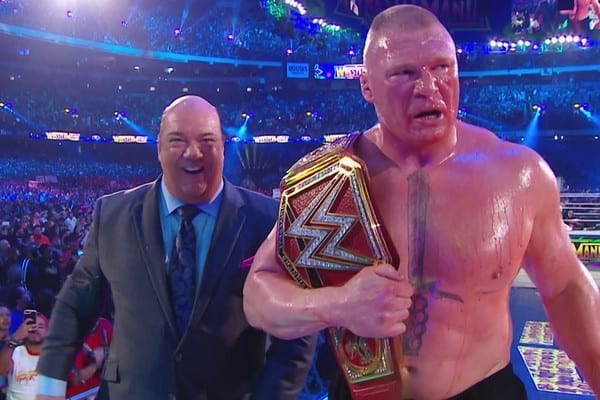 Brock Lesnar’s new WWE contract is a huge reason why Vince McMahon decided to make the decision to change the plan of WrestleMania’s main event against Roman Reigns. But the details of his new contract are a bit elusive at this point.

But one thing that is certain is the fact that Lesnar’s new deal is for way more money. Dave Meltzer discussed Lesnar’s new deal with WWE on Wrestling Observer Radio and although it’s unsure exactly how long he is currently agreeing to, Lesnar’s paydays are much better now. Brock also keeps mentioning UFC for a reason because every time he does McMahon seems to shell out more dough to keep him around.

“[Brock] signed a new contract this is not an extension this is a new contract at a higher rate. I don’t know that it’s only one match, I don’t know if it’s more than one match. I think we’ll probably know after that match what it is. Right now as far as what happens after they may just go through the whole thing again and play both sides against each other and see what develops.”

“I get the impression that I’m sure they want everyone to have is that he’s very willing and wanting to go UFC because every time he said that Vince ups the money. So we’ll see what happens.”

A very good point was mentioned how Lesnar hasn’t even joined the USADA testing pool so it’s kind of a moot point at this juncture. Once Brock starts getting tested then he’ll have six-months until he can fight because his suspension is still in a state of suspension so to speak. But only time will tell what Lesnar really does because in the end, he can do whatever he wants because he’s Brock Lesnar.