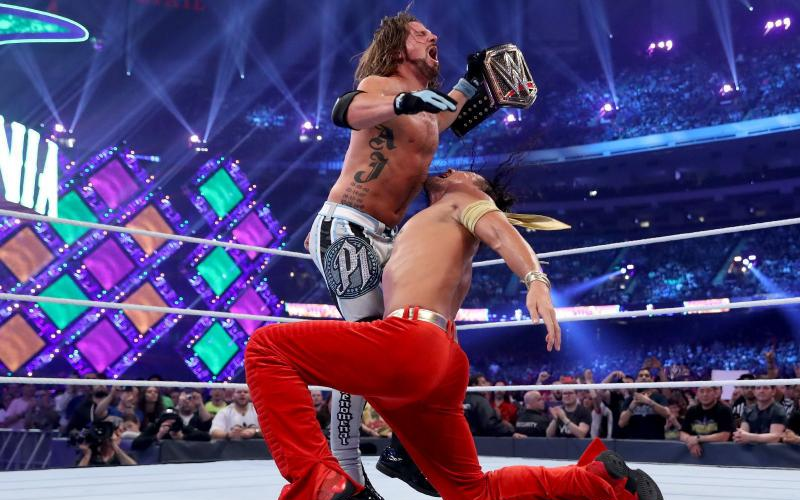 AJ Styles walked out of NOLA still as WWE Champion in a dream re-match that might need another chapter at this point. Sometimes a story can’t finish at Mania, it only takes a sudden turn and when Shinsuke Nakamura went heel on Styles after his loss that was a big enough turn to create a WrestleMania Moment.

It was noted by Bryan Alvarez during Wrestling Observer Radio that there were isolated people yelling “boring” during the AJ Styles and Shinsuke Nakamura match. Then the ending of the match where Shinsuke Nakamura turned full-heel was discussed at length, especially where it comes to a possible future for AJ vs Shinsuke as Dave Meltzer elaborated on the subject.

“We’ll see how the heel thing works, I’m not against experimentation of it […] the thing on this is it felt like when he turned that there was a big cheer and then there was some booing and when he left it felt like the cheered again like they were happy they got to see an angle.”

Bryan Alvarez was there in NOLA and said it felt like the crowd was disappointed with the match because it ended way too early so people were at least happy that they got to witness something go down like Nakamura’s heel turn. Whether it works out well is another story, but if you were wondering why the crowd seemed split on Nakamura’s post-match assault on Styles then there’s your answer.

Meltzer said they could possibly give the title to Shinsuke Nakamura now because as a heel it could make sense.

It was noted that maybe WWE’s thought was it would be better as a heel vs babyface for AJ and Shinsuke so if The King Of Strong Style wins the title soon enough at least Styles will be chasing a heel champion.