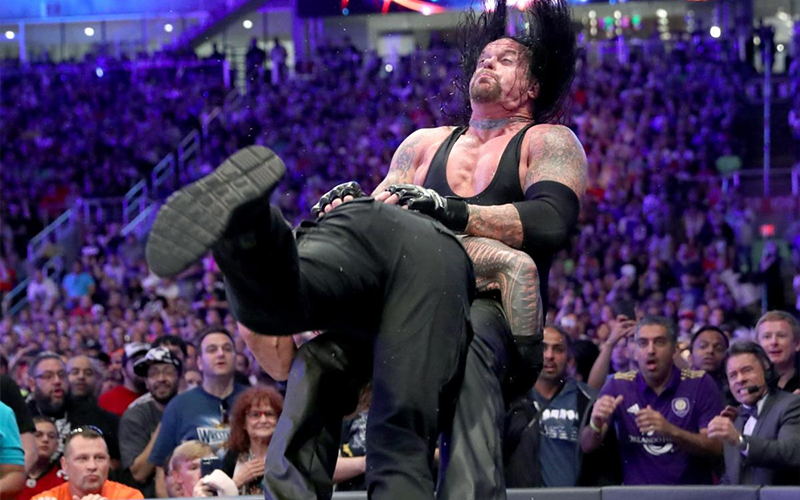 The Big Dawg Roman Reigns recently talked with CBS Sports In The Corner podcast to promote WrestleMania 34 next Sunday in New Orleans. On the show, he was asked to detail his experience wrestling the Deadman at last year’s show in Orlando. Roman was hesitant about describing the incredible pressure he was under to perform with one of the most famous superstars of all time. This was his response on if the match lived up to his own expectations:

I don’t think it ever could, really. It’s a hard spot for The Undertaker to have such a storied career, to have such a huge list of ridiculously good matches, and to have that respect, and to have that mystique, and to have that reputation as the godfather of the professional wrestling and sports entertainment business. So, everyone’s thought about what it would be like to be in a match with The Undertaker at WrestleMania to where you hype it up so much that it’s almost unfair to him. For me, what made it so hard was how heavy it was. You know, if I wrestled The Undertaker 20 years ago at the beginning or the middle of his career, probably not. But the positioning I found myself in, it just felt really heavy and so much more emotional than I was ready for it to be, so I think that was the hardest thing … but, you know, the coolest thing because I think that just shows the gravity of the situation, the responsibility of the placement [on the card] and just who I was sharing the ring with. And that’s just how special he is.

I just feel like maybe I wasn’t good enough or maybe it could have been better on my behalf, but I always hold The Undertaker in so high in that regard that I just feel like maybe I could have done better. But I enjoyed it. I really learned a huge amount in the ring with him; you know, to being in the ring with him for one singles match and to have it be at that level, to be able to pick something up in just 30-40 minutes from another performer — it just goes to show how good he is.

Whether you love him or hate him, Roman Reigns has certainly grown into the best possible version of himself as a performer, father, and human being. It’s magical to see that a superstar of his caliber hasn’t let his position within the company go to his head. He is always striving to be the best, even if the fans will boo him for it. That my friends, is a superstar.

Besides, he still cut one of the PROMOS OF THE YEAR the next night on Raw. BELIEVE DAT.

Roman will be headlining his fourth WrestleMania in a row on April the 8th. This time, against the man he never truly got to finish fighting at his first main event in Santa Clara, Brock Lesnar.