Mahal informs that he’s battling a cold right now, but in typical WWE fashion he’s going to push through the interview. Garcia mentions that the WWE schedule is so tough, and whether you’re sick or not the show must go on. She recalls having issues with her voice but having to push through in order to announce shows. Mahal agrees, pointing out that no matter how sick he is backstage, when the music hits adrenaline takes over and he’s ready to go. 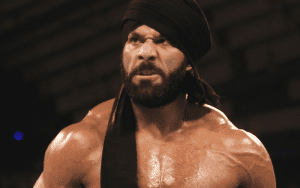 Mahal mentions that he writes his goals down on a piece of paper every day. One of those goals is to main event WrestleMania and he’s sure that’s going to happen one day. He informs that while he was happy to be a part of the Andre the Giant Memorial Battle Royal last year, it was somewhat disappointing to not be on the main show. He really wants to be a part of the main show this year.

He notes that interacting with Rob Gronkowski was a great experience, and he hopes to have a match with Gronkowski at some point in the future. He doesn’t think he’s had a WrestleMania moment yet, and he thinks that match would check that box for him.