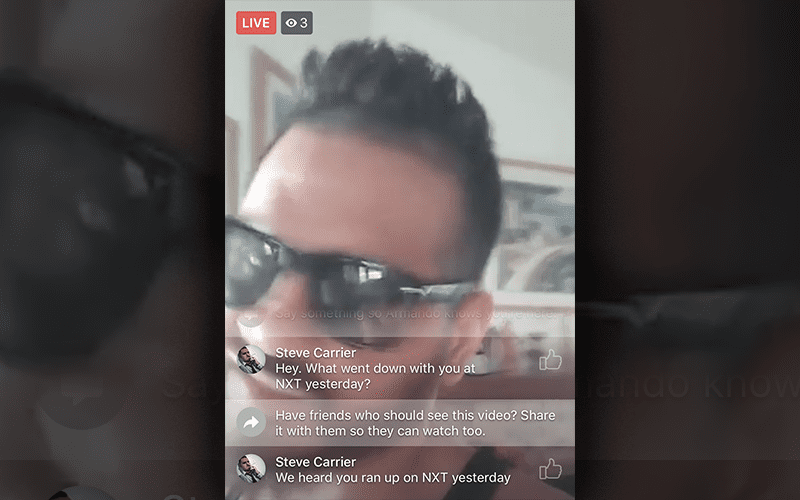 We reported Thursday night that Armando Montalvo, the individual who was shot at after causing a scene at the WWE Performance Center a few years back, returned during the NXT tapings at Full Sail to cause another scene in the parking lot while fans were waiting to get into the venue.

Montalvo was seen running around Full Sail yelling how he could take “Generation Flex” and that Vince will have to “shoot him again.” Before security could catch up with him, he hoped in a car and rode off.

We got a chance to speak with Montalvo on Facebook Live today and said that the reason he returned at the tapings was because he wanted to tell everyone about his new wrestling name, Generation Flex. Montalvo also said he wanted to tell fans in line that he would run thru the entire roster for free.

“I would be more than happy to run thru the entire roster by myself for free, for those fans!”

“I am whiling to hop into the ring and show you all I am the business,” he explained.

Montalvo explained that he wasn’t originally going to go to the tapings but he lost a friend that was like a brother to him and he was feeling down. He claimed that he “saw” his friend and remember that it was his dream to be a WWE Superstar so he decided to go to the tapings. Montalvo knew that the security was going to be after him, indicating that is the reason he wasn’t there long.

When we asked about the incident the day he was shot for trespassing at the WWE Performance Center after he allegedly charged officers with a knife, he denied that he was carrying a knife. Montalvo then accused Vince McMahon of paying everyone off to bully him in the media.

This guys obviously isn’t in his right mind but we figured we would reach out to him and ask him exactly why he returned at NXT after being shot at the WWE Performance Center.

You can check out his remarks embedded below: