Russo opens today’s show by reacting to Wrestling Observer’s Bryan Alvarez and Dave Meltzer talking about the length of the Gauntlet match on RAW this past week. Alvarez pointed out that the Cena/Rollins portion of that match was 29 minutes, but Meltzer quickly insisted on checking his notes, adding that it was definitely 30 minutes or longer.

Russo laughs and points out that these guys are both grown men who spend their time recording the length of fake fights. Russo says he doesn’t have time to look at the clock when he’s watching RAW because he’s too busy throwing acid in his eyes so he doesn’t have to watch the show. 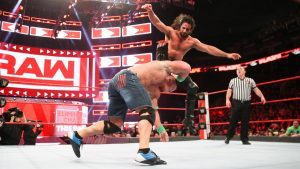 Meltzer went on to talk about why he believes people would enjoy longer matches on WWE programming. He mentioned that tension constantly builds during 5-round MMA fights. Russo wonders if anyone has told Meltzer that wrestling is scripted yet because you can’t compare professional wrestling to MMA in this manner.

He adds that 5-round MMA fights build tension because it’s not a scripted fight. Wrestling, on the other hand is scripted, and therefore the match lengths are determined in advance by some writer employed by WWE. It’s not comparable at all and he thinks Meltzer’s a clown for saying these things.