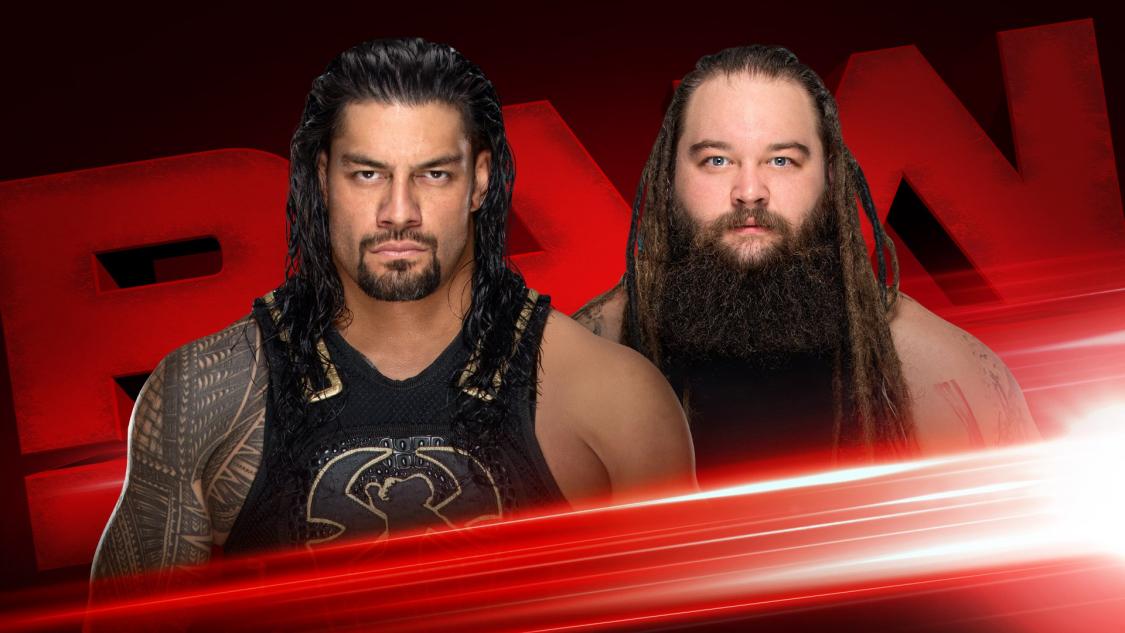 “Then. Now. Forever.” The WWE video leads us into the show.

Bray Wyatt is shown in a backstage promo. The Elimination Chamber is upon us, the home of his greatest victory when he won the WWE Championship last year. Standing in his way is his nemesis, Roman Reigns. Reigns has fallen so far down that the world no longer recognizes him, but he does. Reigns lost the Royal Rumble and the Intercontinental Championship, but he still shows bravado. Wyatt knows Reigns is a failure waiting patiently to be put out of his misery. Wyatt is happy to oblige him. Tonight, Reigns will find out that waiting for him at the bottom of the spiral is something worse than failure: Wyatt.

Roman Reigns is shown elsewhere backstage. Reigns says failure is someone who can’t deal with adversity. A failure gets knocked down and stays down. Reigns has had his fair share of ups and down, but that’s not a failure. It’s the mark of a great journey. His journey will put him in the Elimination Chamber and onto Suplex City at WrestleMania. Bray Wyatt can’t stop him, and neither can Brock Lesnar.

The bell rings, and they circle the ring before locking up. Wyatt powers him to the corner and gives a clean break before taunting him. They lock up again, and Wyatt hooks a side headlock. Reigns whips him off and follows him into the ropes to surprise him with a shoulder block. Reigns applies a side headlock, but Wyatt fights out and puts him in the corner. Reigns sidesteps a splash, but Wyatt quickly arks his back to startle him. Wyatt boots him before going to the second rope, but Reigns cuts him off. Reigns gets him on his shoulders, but Wyatt elbows out before sidestepping him and sending him into the ring post shoulder-first. Wyatt forearms him in the face for a near fall. “WOKEN” Matt Hardy is seen watching backstage. Wyatt applies a chin lock, but Reigns fights up and fights out. Reigns hits a pair of clotheslines before ducking a clothesline and hitting a leaping clothesline. Wyatt quickly rolls out of the ring to recover. Reigns goes for a Drive-By Dropkick, but Wyatt clotheslines him down on the apron. Wyatt then sends him into the ring steps.

We come back from the break to see Wyatt applying a knee to the back chin lock. During the commercial break, Wyatt gave Reigns a DDT on the apron. “WOKEN” Matt Hardy is seen gleefully watching backstage. Reigns fights up and connects with a Samoan Drop. Reigns gets him in the corner and starts his clubbing blows, but Wyatt blocks one and goes for a one-armed slam. Reigns gets out and hits the ropes, but Wyatt annihilates him with a body block for a near fall. Wyatt gets him in the corner and puts him on the top rope before giving him an uppercut. Wyatt goes for a superplex, but Reigns blocks it and punches him down. Wyatt quickly chops the chest with Reigns still on the top rope. Wyatt says, “Anyone but you, Roman. Anyone but you.” Reigns stuns him with some wild head-butts before sliding down and hitting a sit-out powerbomb for a near fall. Reigns slowly gets to his feet and sets up in the corner. Wyatt counters a Superman Punch into a uranage before immediately following up with a senton splash for a near fall! Wyatt is so stunned he kicked out that he cannot do anything but laugh.

Roman Reigns joins Braun Strowman, Elias, and John Cena in the Elimination Chamber Match. The winner will go on to face Brock Lesnar for the Universal Championship at WrestleMania 34.

Loud “DELETE” chants pick up as “WOKEN” Matt Hardy appears behind Wyatt. Wyatt angrily turns and tries to blindside him, but Hardy kicks and hits him with a Twist of Fate.

Jason Jordan is seen warming up backstage when Seth Rollins walks up. Rollins asks if he’s 100% due to his neck and shoulder issues. Rollins says this is their last time facing The Bar and can’t have Jordan tagging out and sitting on the steps like at the Royal Rumble. Jordan says he feels fine. Jordan talked to his dad and has been cleared by the doctors. Rollins says this isn’t about either of them. It’s what they can do together. Tonight, they need to go out there and win back their Tag Team Championships.

Seth Rollins and Jason Jordan will face The Bar for the RAW Tag Team Championships later tonight. We’ll also see Braun Strowman versus John Cena versus Elias with the winner being the last person in the Elimination Chamber.

The Balor Club makes their entrance.

The Revival comes out next with microphones. Scott Dawson says in case the crowd hasn’t been paying attention since they came back to Monday Night RAW, they are The Revival. As The Revival, they are tag team specialists. Dawson suggests they make this a tag team match. Dash Wilder says if Finn Balor wants to choose one of his Club buddies as a partner, they’ll show them how it’s done. Balor consults with Gallows and Anderson before picking Anderson.

Finn Balor and Karl Anderson vs. The Revival
Dash Wilder starts against Karl Anderson. Anderson tries for a tie-up, but Scott Dawson quickly tags in. They lock up, and Dawson gets him in the corner before punching him. Dawson puts him in the corner and chops him before punching him. Anderson reverses a whip to the corner, but Dawson stops the momentum. They hit the ropes, and Anderson hits an arm drag and a back elbow. Wilder runs in, and Anderson hip tosses him. Balor comes in, and they hit stereo back body drops on The Revival. Balor and Anderson do the “Too Sweet” hand signal.

We come back from the break to see Dawson applying an arm bar to Balor. Balor fights up, but Dawson gets him in the corner. Balor fights The Revival off, but Wilder tags in and stops the tag to Anderson. Dawson tags back in and yanks away at the injured arm of Balor. Dawson takes him down and applies a Fujiwara arm bar. Balor fights out and double stomps him. Anderson tags in and hits a clothesline and a back elbow on Wilder. Anderson dropkicks him down and knocks Dawson off the apron. Anderson knees Wilder in the face and hits a flying neckbreaker. Wilder gets out of a body slam, and Dawson holds him to avoid a dropkick. Anderson hits Dawson with a spinebuster, but Wilder breaks up the pin. Anderson knocks Wilder out of the ring and tags in Balor. Anderson then hits Wilder with a summersault plancha. Balor hits Dawson with a Sling Blade before dropkicking him into the corner. Balor then hits the Coup de Gras for the win.

Kurt Angle will reveal the competitors in the First Ever Women’s Elimination Chamber. Alexa Bliss will defend her title inside the chamber. We’ll also see Bayley take on Asuka.

Sasha Banks is watching a replay of herself tapping out against Asuka last week. Banks looks upset. Bayley says she needs to stop punishing herself. Banks says she needs to remind people that she’s still The Boss. She knows she’s ready for Asuka and knows how to beat her. Bayley asks for tips, but Banks declines. Banks says if she’s in the chamber match, she’ll walk out as champion and end Asuka’s undefeated streak. Bayley says she was thinking the same thing. Banks asks if Bayley really believes she can beat Asuka. Bayley says she knows she can beat Banks. If Banks is good enough to beat Asuka, so is she.

Drake Maverick, the General Manager of WWE 205 Live, is on commentary for the next match.

Tony Nese powers Ali into the corner before counting his abs. Ali comes back with a running hurricanrana before tagging in Cedric Alexander. Alexander and Ali take down Nese with dropkicks. Nese snaps him off the top rope and clotheslines him down. Drew Gulak tags in and clubs Alexander in the back for a one count. Gulak puts him on the top rope and clotheslines him off. Alexander legitimately nearly lands on his head. Nese is tagged in and applies a body scissor. Alexander fights out and boots him back. Ali and Gulak are tagged in. Ali hits a pair of shoulder blocks before hitting a dropkick. Gulak reverses a whip, but Ali comes back with a back elbow. Ali hits a tornado DDT, but Nese breaks up the pin. Alexander knocks Nese out of the ring and hits a summersault senton. Ali hits a cross-body block, but Gulak kicks out. Gulak turns Ali inside out with a clothesline. Alexander manages to tag in and hits Gulak with a Lumbar Check for the win.

Kurt Angle makes his entrance. Angle says history was made last Sunday with the Women’s Royal Rumble. RAW’s Asuka was the winner. The Women’s Evolution continues with the first-ever Women’s Elimination Chamber match (Angle had a hard time remembering the name of the match). Alexa Bliss will face Bayley, Mandy Rose, Mickie James, Sonya Deville, and Sasha Banks inside the Elimination Chamber. Conspicuous by her absence is Nia Jax. She’ll face Asuka. If Jax wins, she’ll be entered into the title match at WrestleMania, making it a triple threat.