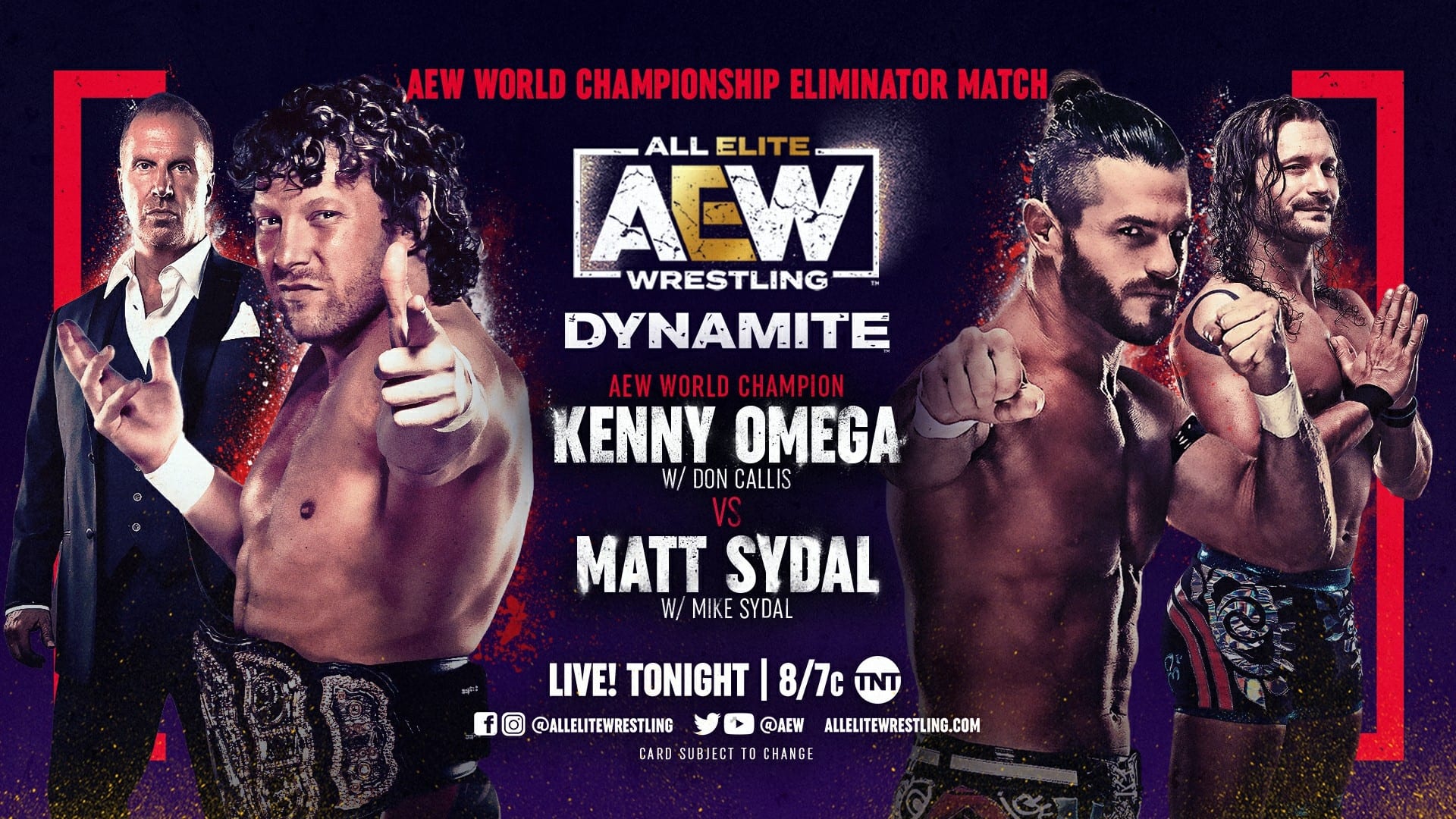 It’s Wednesday and you know what that means. AEW Dynamite will go down tonight and Ringside News has got you covered with live play-by-play results coverage.

Start time for AEW Dynamite is at 8:00 PM EST. Match-by-match highlights and results from the show will take place on this very page. Feel free to leave any
reactions in the comment section below. The card for tonight is as follows:

Sydal and Omega go face to face then meet in a lock up. Omega rings the arm, Sydal kips up and gets hit with an elbow. Omega with shots to the head then a body slam. 2 count. Omega with chops, Sydal reverses and hits a huricanrana. Omega thrown out of the ring. Back in the ring they go for a test of strength and Omegs kicks to the gut, roman knuckle lock and shoulder blocks from Omega.

Omega slows down the pace, Sydal gets some kicks but Omega fights back, Sydal hits a standing moonsault for the 2 count. Kicks in the corner from Sydal. Omega throws Sydal from the top rope but Sydal reverse into a huricanrana. Omega hits a big backdrop and brings Sydal to the outside, backdrop onto the apron. Omega with a back breaker for a 2 count. Omega goes for a powerbomb but Sydal reverse into some kicks, huricanrana from the top, Sydal hits a brainbuster for the 2 count.

Commentary runs down the card. Mervez is with the Dark Order backstage, Silver says hes ready, they do trust falls, ignoring 5, Hangman Page asks Silver if hes nervous, Silver says he isnt and Hangman says Dark Order will be proud of him either way.

Lock up to start, Bononi overpowers Page, Pages gets some chops, Bononi throws him to the corner. Page ducks under a big boot and hits a boot of his own, Page sends Bononi to the outside, Bononi with a slam onto the apron. Bononi with shots in the corner , Page ducks under a clotheslines and tees of on Bononi, Page cant lift Bononi, Bononi hits a slam of his own. Page with running clotheslines to little effect, Page hits a slam and then a buckshot lariet for the victory.

Page celebrates with some beers on the stage.

Recap of last week’s main event between Britt Baker and Thunder Rosa. Tony Schiavone is on the stage with Baker. Tony encourages the crowd to give a round of applause to Baker. Baker calls them dumb and delusional. Bakers says Rosa should be thanking her because she will always be remembered now. She will be the part of history Baker wrote with her own blood. Baker says she doesn’t need the praise of the legends, it took Mick Foley decades to be a hardcore legend and she did it in one night. She is the biggest legends in AEW, she made history and put AEW on the map and those 3 letters come second to DMD.

The Pinnacle leave their locker room.

Christian Cage is backstage talking with Varsity Blonds and Dante Martin, Dasha askswhat they were talking about, Cage says they were talking shop, giving them advice on tag team matches. Kaz comes up to Cage and says he lives up to Cages catchphrase, when does the work part begin. Cage asks why he is being cranky. Cage says the work starts next week, and it will be against Kaz if he wants to step up. Kaz asks if he’s busy on Monday nights, asks and Cage should watch his match on Elevation.

Garrison starts with Spears, lock up Garrison throws Spears into his corner. Spears drives Garrison to the mat, wrings the arm, Garrison tags in Pillman, Pillman tags in Martin, Pillman tags back in all wringing the arm, Dax tags in and hits a clothesline, elbow drop, chops in the corner. Spears tags back in as Pillman tries to fight out, superkicks to Dax and Spears, Martin tags in and hits a moonsault, Garrison tags in and takes Dax and Spears down. Pinnacle regroups on the outside and Varsity Blonds and Martin fake out a suicide dive.

The Pinnacle continues the attack after the match. Tony Schiavone is in the ring, Cash says the Pinnacle is not just a name, they are family, he will live for these men and die for these men. Dax says Santana and Ortiz have done well for themselves but the marquee says professional wrestling. MJF says hes confused why Jericho hasnt said anything yet. the only thing he breaks these day is the chairs he’s sitting in. MJF says Jericho is terrified, MJF intimidates Tony. He has a gift for them next week. When you are in the Pinnacle you are always on top.

Team Tazz is backstage, Tazz says there are non problems in Team Tazz, Cage apologised for last week, everything is good.

QT Marshall is frustrated, he points out his wife in the crowd, Cody taught him the value of doing the work. Nobody has done more actual work than him. He will stay and work all night while Cody goes to the hotel to sleep with his wife. No matter what he does he will have an asterix by his name saying “Cody’s friend”. Next week he will have a exhibition match with Cody. He will not take meaningless bumbs if it has to be in that mans shadow.

Cody comes out and says he understand the angst, says his heart is not into this but he will accommodate the exhibition match next week and Arn Anderson will be the referee. Says he wont hurt QT next week, he will relinquish the figure 4, he will not hit the crossrhodes. Calls QT a good assistant, and has become a friend. Calls QT his best friend, they shake hands.

Fenix makes his way to the ring with Loredo Kid and Penta. The Young Bucks are out next. Matts wife and kids are at ringside.

Nick and Fenix start, Nicks goes for a rollup, Fenix reverse into a headlock, pins back and forth, both men miss dropkicks, they are evenly matched. Penta tags in with Matt. Matt kicks to the gut, Penta with a superkick, Matt with an arm drag, Penta with a crucifix for 2 count. Matt locks in a sharpshooter. Cutler and Loredo Kid tag in, Kid with a shot to the midsection, jacks the jaw, Kid with a huricanrana, the Bucks hits a double superkick, Fenix hits a double armdrag. Penta with a dive over the top rope onto everybody, Fenix goes for the same but Cutler hits a diving elbow strike then hits a springboard onto everybody outside, Kid hits a moonsault to the outside.

Back in the ring, Nick hits a kick on Fenix, the Buck hits an homage to the Motor City Machine Guns. Picture in picture. The Bucks and Cutler take the advantage with trios offence. Matt with a suplex, Cutler tags in with strikes to the back. Fenix with a huge DDT. Nick and Penta tag in Penta with a slingblade and another one, Lucha Bros hits double superkicks, Fenix with a splash for a 2 count. Kid with a springboard huricanrana, Penta with the footstomp, Fenxi with a senton, Bucks break up the count.

Nick with a rising knee strike, elbow strike, superkicks back and forth, Nick with a huge clothesline. Matt and Kid with strikes back and forth, Matt with locomotion northern lights suplex. Nick tags in with a knee strike. Bucks hit risky business, Cutler with a springboard elbow, Penta breaks up the pin, Nicks kicks Penta on the outside. Nick with a senton to Penta on the outside. Bucks hit the Indytaker, Nick dives onto Penta outside, Matt hits a DDt on the apron, Kid hits the Spanish fly on Cutler for the win.

Omega attack Loredo Kid, Kenny says he’s having flashbacks to the first Fyterfest. They all had a choice, they were family, 3 years ago he had a choice, he never chose AEW, he chose the Young Bucks, to make AEW the best promotion in the planet, Omega chose them but they didn’t chose him. He gives them one more chance, Kenny throws up Too Sweet, are they with him? the Bucks walk away. Kenny says they are done, the Lucha Bros attack Kenny with a double superkick. Good Brothers and Callis comes to Kenny aid.

Carghill video package. Carghill and Red Velvet are on a collision course. Brandi and Cody Rhodes have a reality show!

Recap of the Good Brothers attack on Moxley and Kingston. Kingston hasa broken something. Eddie says this isn’t New Japan, this isnt about selling tacky shirt, how far are they willing to take this? Moxley says there is war on the streets of Jacksonville. He doesn’t like the Young Buck but he owes them one. Has no patience’s for the Bullet Club melodrama, and they better be willing to get their hands dirty.

Nyla Rose makes her entrance with Vickie. Tay Conti is out next, Dark Order have Conti’s back.

Rosa attacks Conti, boots to the midsection. Rose bodyslam, Conti goes for an octopus , Rose gets the crucifix and Conti locks in an armbar. Conti with judo throws, rose with a huge slam for a 2 count. Rose with an armbar, biting the fingers. Stomps in the corner. Conti with a rollout, Rose breaks free and hits a clothesline. Suplex into the ropes, Rose with a knee from the top for the 2 count.

Conti cries in happiness as she celebrates, Vickie distracts her and Rose goes for the attack, Shida makes the save with a kendo stick. the Bunny comes down and hits Shida with the kendo stick then attacks Conti. Hardy and Butcher and Blade come out and watch Bunny and Rose’s beatdown. Matt says the women’s eliminator was a shame because the Bunny wasn’t in it.

Recap of the Miro, Kip, Orange, Taylor feud. Next week is arcade anarchy.

Scorpio Sky says this isn’t a new side of him, but a side we haven’t seen. Everybody has to stop pretending he isn’t uniquely talented, his days of being underrated are over. On Elevation its time to pay the rent, he is more than one man, he is the face of the revolution.

All the Dark Order enter with John Silver. Next out is the TNT Champion Darby Allin.

Picture in picture. Silver continues the attack, powerful irish whip into the corner. Darby gets an elbow up. Silver attacks in the corner. Kicks to the back. Silver with a Gory Special, spinning Darby for a 2 count. Silver with kicks to the back. Forearm strikes. Darby is out on his feet, Silver kicks him to the outside. Darby thrown into the barricade, Darby sidesteps a running attack and Silver goes crashing over the barricade. Darby is back in the ring. dark ORder help Silver back into the ring, Dabry with a suicide dive, 5 takes the bullet for Silver.

Silver with kicks on the outside, eyes Sting. In the ring, Silver hits kicks to the chest. Darby catches the leg and hits big right hands, Silver with strikes of his own, Darby with double boots, Silver reverse a victory roll for a 2 count. Darby with forearm strikes, springboard elbow, pump kick from Silver. Darby throws Silver from the top rope, Darby hits a coffin drop on the Dark Order on the outside. Silver with a high kick, hits a spinning slam from the top 2 count as Darby gets to the ropes.

Silver goes for a powerbomb, Darby hits the code red for the victory.

Sting and Darby pay respect to Silver, Matt Hardy attacks Darby. Chaos in the ring, huge brawl. Sting hits Quen with the bat, Conti attacks Jay. Darby with a tope on Hardy. Dynamite ends with everybody brawling in and around the ring.