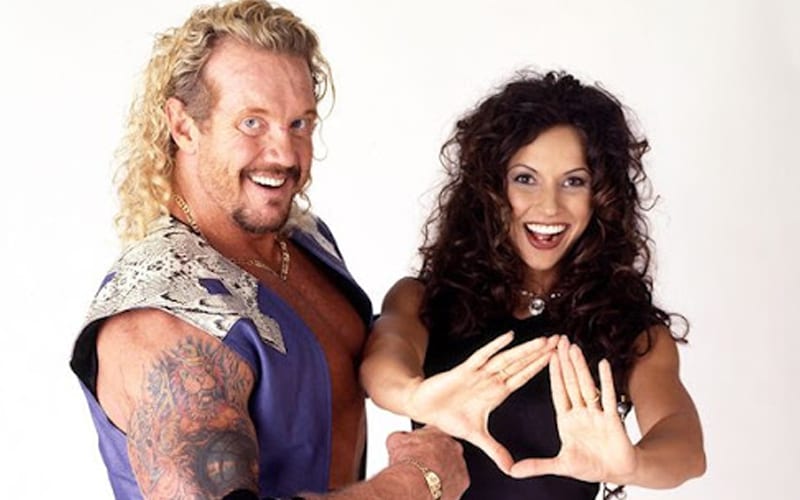 There are many stories about the pro wrestling world. Vice dedicated an entire series highlighting some of those stories with Dark Side Of The Ring. DDP and Kimberly Page’s relationship has long been a source of intrigue.

During a recent episode of 83 Weeks, Eric Bischoff discussed the rumors about DDP and Kimberly Page’s relationship being an “open one.” He shut those down in a big way and said they couldn’t be further from the truth.

“I happen to know who started the rumor, and I’m not going to mention this individual’s name because it doesn’t really matter anymore. But, one individual decided to spread the rumor that there was some kind of an open relationship between myself and Mrs. B and Diamond Dallas Page and Kimberly. Nothing, by the way, could be further from the truth.”

“In real life, in 1996 or 1997, let’s just set aside the fact that I would have never participated in that for a whole lot of reasons, but one of those whole lot of reasons was the fact that Kimberly and I didn’t get along at all. There were more than one occasion socially if I was over at Page’s house and we were having beers and Kimberly happened to be there, it would get so uncomfortable that I would have to leave. We just didn’t get along. I’m not exactly sure why, but whenever we were together socially, it was uncomfortable. She didn’t like being around me and I didn’t particularly like being around her. I don’t know what it was. It was not good, whatever it was.”

“That changed as time went on and it was a lot easier for us to be around each other, but, I know who spread that rumor, and I guess, the more wiser, enlightened version of myself understands why. Whatever. Page did have a lot of heat. But, you know what Page also had by this time? He also had a lot of respect. A lot of the same people who said, ‘The only reason why he has this gig is because he’s Bischoff’s neighbor and Bischoff’s buddy’. There was a lot of that and I can understand that too because if you didn’t know me really well and if you didn’t know Page really well, from a distance, the optics would make it look like here’s two guys that are buddies.”

“Page helped him get his job at WCW and now Bischoff is returning the favor and giving him all these opportunities. What they didn’t know was Page was working his ass off in his own time to try to create those opportunities. What they also didn’t realize is, and Page will tell you this if you ever sit down and talk to him, that I was tougher on Page than I was on anybody else on the roster because he was my friend, just like I would be with my own son, or my own daughter, because I knew back then with Page, with respect to Page, that he had to overcome his relationship with me, It wasn’t an asset. It was a liability for Page and he had to work twice as hard to get it. But, if you don’t know that, if you’re just taking pot shots from the sidelines because you only come in to do TV once a week and you’re not around, I understand why people would say that. But, by 1997 Page overcame a lot of that and actually had a fair amount of respect from almost all the boys.”

It’s nice to have an old myth about the pro wrestling business cleared up. Often times things like this aren’t addressed, leaving fans to speculate about what might be really going on.