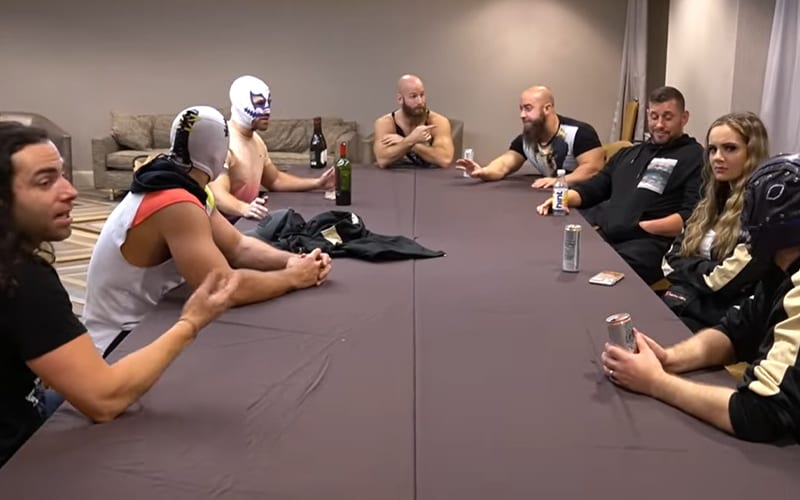 The Dark Order will carry on after Brodie Lee’s passing, but there are a lot of questions about their direction. The heel faction turned babyface in a big way at Brodie Lee’s Celebration of Life, and it appears they will remain that way.

Talk is Jericho recently had Anna Jay on as a guest. She discussed the Dark Order’s future and said that she believes they will remain on the good guy side of things. A lot of things are up in the air right now.

Jay also brought up Tay Conti and how she hopes to continue working with her as well.

“I hope we stay together at least for a little while. I think now we’re even more like a family on-screen and off-screen, so I feel like we kinda have to go in that direction on Being The Elite and on Dynamite. I don’t really know if we even really know exactly what we’re doing, but that’s what we think. Probably nice guys now.”

“I hope so (to doing more stuff with Tay Conti). I’m not really sure what everyone else’s vision is. I think us being kind of nicer guys now it’s working out to where I can do more stuff with her because I think they wanted her to be completely face. So I hope we get to. I like tagging with her and it helps me too experience-wise, kind of get a better feel. Plus it’s good to have a tag match every now and then just because I don’t know much about tag matches, because I’m still learning to be a singles wrestler.”

Tay Conti and Anna Jay really formed a bond on screen. Conti recently sent a glowing tweet about a stunning photo Anna Jay posted. We’ll have to see if they eventually make Tay Conti’s place in the Dark Order official. Anna Jay is just glad that AEW is keeping her family together after they lost their Exalted One.