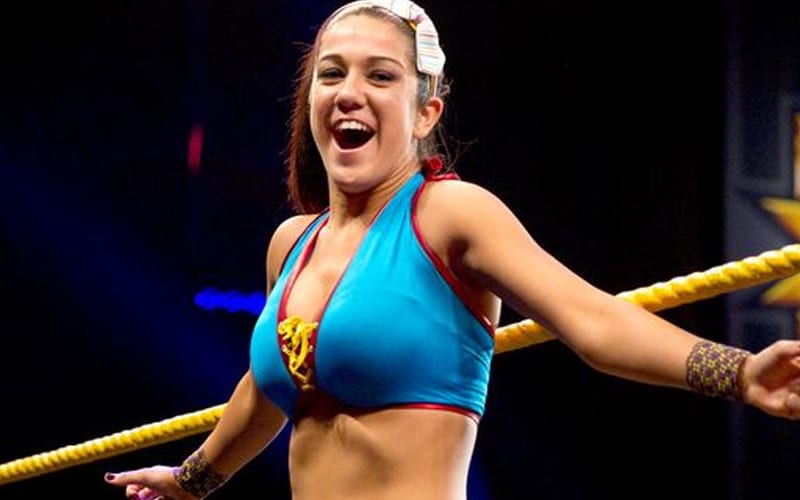 Bayley is a mainstay on the WWE main roster now, but there was a time when she thought that a poor wardrobe choice would get her fired.

While speaking to The New Day: Feel The Power, Bayley told a story about showing up to her WWE tryout while wearing the wrong thing completely. She was told to wear something presentable, so she bought a dress. It turns out that she purchased the wrong kind of dress.

She was pulled aside and told that her dress was too revealing. That cleavage almost cost Bayley her job with WWE, or at least that’s what she thought at the time.

“So, my tryout was in LA – they had a warehouse out there. It was a three-day tryout, so I hadn’t even seen FCW; I hadn’t been there. I’ve only seen it in pictures or short videos. On my first day, I just remember seeing that all the walls were black and it was a little grungy. I liked it. There were three rings, and I was in so much awe.”

“There were so many people because it was kind of small. We’re passing all these people and I was already intimidated. I would say the main thing I realized throughout the years was to be comfortable in your skin and just realizing I didn’t have to be this big old diva or model, which was what I was really scared of.”

“[The writers] said, ‘Wear something presentable’ and I bought this dress that I thought was going to get me noticed. They made me go change because I was showing way too much cleavage. I was not me at all. I just thought that’s what they wanted.”

“I remember them pulling me aside and they’re like, ‘You need to change. What you’re wearing is unacceptable.’ I’m like, ‘What do you guys want from me?!’ I was so unsure of where I was going to fit and how it was going to happen. I was pretty sure I was going to get fired.”

Bayley wasn’t fired, and her dress didn’t cost her an opportunity in WWE. She signed with the company and the rest is history. It just goes to show that there is a fear of hitting a roadblock even when travelling down the most successful roads.