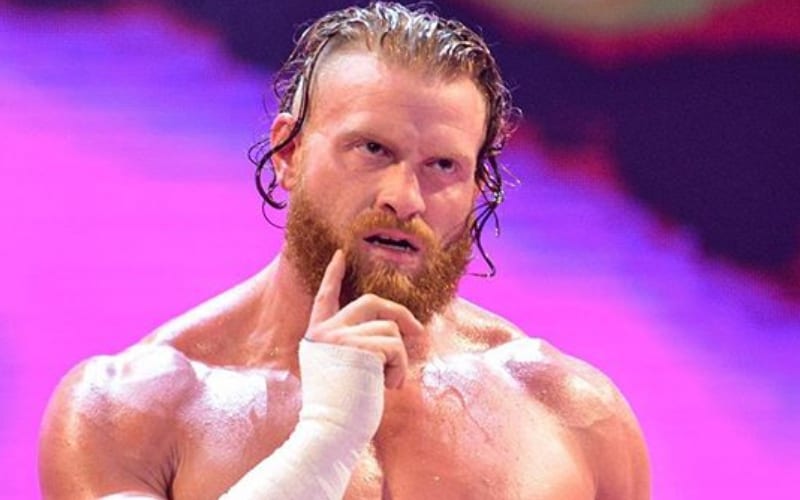 Murphy went through a name change in WWE during his tenure with the company, and it was quite a trip even getting that name for the Australian Superstar.

While speaking to After The Bell, Murphy explained his naming process in NXT. He had several names in mind, and they ended up going with Jag Cooper. The problem was that his Australian accent couldn’t handle the word “Jag” for his coaches’ American ears. This caused them to change up plans once again.

Murphy, whose real name is Matthew Adams, wanted to go with “Matt,” but that was off the table. There are simply too many Matts in pro wrestling and they wrestle on one, too. In the end, they landed on Buddy Murphy because it was not only easier to autograph, but also understand.

“So obviously, we pitch names, and I wanted to use ‘Matt’ so bad, but as you know, there was a lot of Matt’s. Using the name Matt was the forbidden fruit. So I pitched a whole heap of these names, and it’s funny because I put a lot of effort into these names. And when I had sent the email Byron [Saxton]… when he got the email, I had all the names scattered. So he just picked ones that matched, and he pitched it.”

“And then when they pulled me into the office, they said, ‘These are your names,’ and I look at the names. And I’m like, ‘Okay, well, there’s one clear winner here.’ He goes, ‘Yeah, there is,’ and I was talking to Bill. I said it’s this one, and it was ‘Jag Cooper.’ I was like, that’s kind of cool, Jag, and then he’s like, ‘Yep, that’s it.’ So then Bill would pull in Norman and goes ‘introduce yourself.’ I go, ‘Hey, I’m Jag Cooper,’ and Norman goes, ‘Jack?’ No Jag. Because of my accent, ‘no, redo it,’ and then I go, ‘Gooday, My name’s Jag Cooper’ (Murphy puts more emphasis on the G).”

“It sounds weird, but then Bill would start pulling in all the coaches, and I would have to introduce myself as all these names. And then it came down to ‘Gooday, I’m Buddy Murphy,’ and then it basically came down to an autograph. Jag Cooper and Buddy Murphy and my real name is Matt, so I have a nice M and B’s easy to do in autograph form, but to do J-A-G in capitals, that’s tough.”

Perhaps WWE will pull the “Jag Cooper” name out of their box of gimmicks at a later date. It wasn’t meant to be for Murphy, and everything seemed to have worked out well for him so far. It’s hard to imagine Jag Cooper having the same storylines as Murphy, let alone Rey Mysterio approving that his daughter date someone named “Jag.”