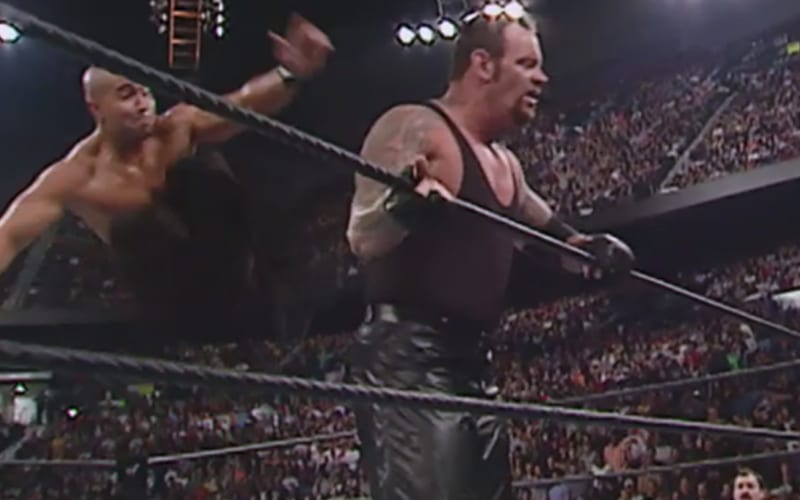 Maven eliminated The Undertaker from the 2002 Royal Rumble match, and fans are still talking about that 18 years after the fact. The first-ever Tough Enough winner remembers it very well, too.

The former WWE Superstar recently appeared on The Bump where he revealed what he’s up to now on Wall Street. He also walked fans through the experience surrounding that famous Royal Rumble spot.

“I was in developmental, I was in Cincinnati, Ohio, at HWA, Heartland Wrestling, you know, with a lot of guys that became just WWE staples, like Jamie Noble, Three Minute Warning was there.”

“I got the call literally the day before saying, you know, because Tough Enough had just ended. I think I’d been on programming probably a handful of times, maybe two or three times, I wrestled Tazz a couple of times, I wrestled Booker [T] on SmackDown once. And the day before, they called and they were like, ‘You’re going to Atlanta,’ which is where the Rumble was. I flew out the next day, no clue what was gonna, at that point, you know, I’m not an idiot. I knew I’d probably be in the Rumble.”

“But I knew I would probably come out, get a quick, you know, whatever pop Tough Enough was gonna give. And then I would be thrown out and gotten rid of as soon as possible. When I got there and they called me to the ring, and it was Shane [McMahon] and ‘Taker. At the time, I’m terrified, you know, I mean I’m the rookie, I’m young, I’m in my mid-20s, and I’m standing there with Shane McMahon and The Undertaker. Scared to death. And then he tells me, he’s like, ‘Maven, you’re gonna come in and eliminate him.’ And I thought he was completely joking. I thought it was the rib of the century.”

“Well, then Taker turns looks at me and says, he goes are you f’n kidding me? And at that point, I wanted to run. I wanted to just leave. But come to find out it was, I think, ‘Taker had his hands on that, and what was going down for that day, so he helped my career more than anyone on that single day.”

“From that day on, me and him had kind of a bond, I guess you would say. He always gave me that smile, that little, ‘Hey, kid’ look. And that me know that what I did, he was satisfied with it.”

Maven’s time in WWE wasn’t very long, but he certainly made a big impression at the 2002 Royal Rumble. He said that fans will still approach him in public to this day and ask him about the experience of eliminating the Deadman. Now we all know the story as well.