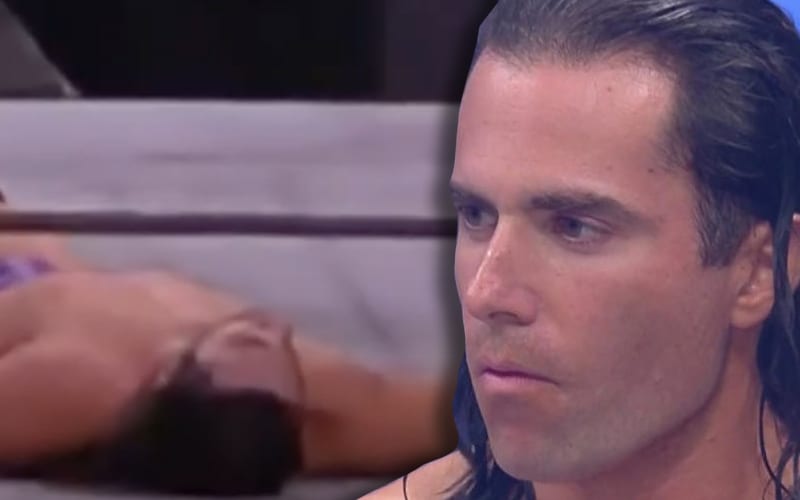 AEW star Alex Reynolds suffered a scary spot during Dynamite last week. He took a top rope leg drop to the face, and he was out cold. It took nearly a minute before anyone realized he wasn’t okay. Even fans watching at home didn’t realize Alex Reynolds was hurt.

Pro Wrestling Junkies hosted a virtual meet & greet with Alex Reynolds where he was able to open up about that scary spot. He said that AEW’s team does a “fantastic job” and they took care of him as soon as they realized he was hurt.

“No, I think our team does a fantastic job. I think they took care of me, right away when we all realized I was hurt. They got me out of there nice and safe, so it’s a contact sport, you know? Injuries are gonna happen and I think they’ve shown that they can handle those situations so yeah, I don’t think those safety concerns are validated, as somebody who’s kinda just lived through it. I’ve put my trust fully in our staff.”

He was also asked about retuning to the ring. He plans to meet with AEW’s doctors after taking a week off to see if he can get cleared. Reynolds already stated that he’s feeling pretty good.

“Yeah, so we have this week off so I’m just kind of resting up and then [when] we go back down, I have to go talk with [the] doctor and see, but he thinks I should be good to go. Yeah, it was definitely a scary moment but I feel pretty good and looking forward to being back in action.”

Injuries happen in the ring, and selling is also a part of the illusion. Sometimes things can get carried away and lost in the chaos. That is all part of the risks involved in pro wrestling. Thankfully, Alex Reynolds is okay after the scary ordeal was over.