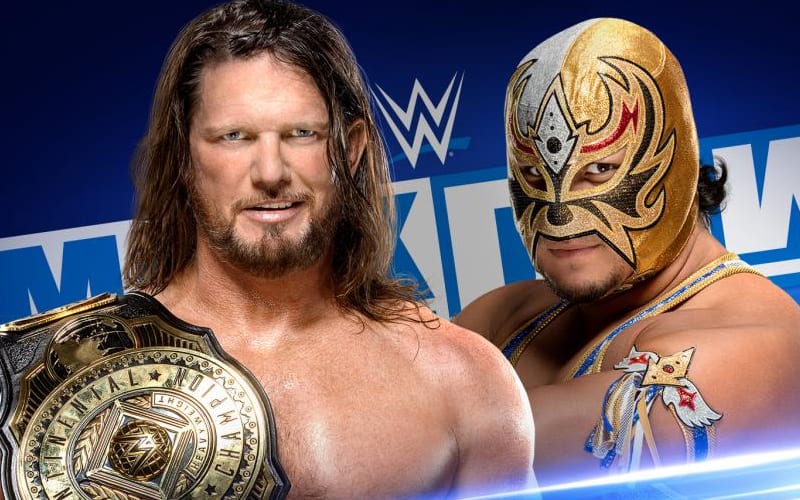 Two title matches are slated for tonight. Let’s see what actually transpires in both of those championship instances.

AJ Styles will defend the WWE Intercontinental Title against Gran Metalik. That match has the potential to surprise a lot of detractors.

Bayley and Nikki Cross will also battle with the SmackDown Women’s Title on the line. We’ll have to see how that one turns out as the Golden Role Models really like their championship status.

Naomi will take on Lacey Evans in singles competition. Fans will also get an update on Otis and Mandy Rose’s love story.

Bray said he never wanted to hurt Braun Strowman. He only wanted to help him. Now “he” (Fiend) is awake and he wants what Braun has (the title). He said until “he” gets what he wants none of you are safe. Then Bray said BYE!!

They started out slow by backing each other into the corner. Styles hit a backbreaker and gave Lince Dorado a dirty look.

Styles backed Metalik into the corner again and then whipped him into the opposite corner hard. Metalik avoided a Styles Clash, but he took a hard chop. Then Styles grabbed him, threw him down, and missed with an elbow.

Metalik hit a rana that sent AJ out of the ring. Metalik jumped over the ropes as Styles slid in, so Metalik landed on the apron, but Styles dropkicked him down. Then Styles went to jump down, but Metalik took out his legs in return.

After commercial, AJ caught Metalik on the top rope. Metalik knocked Styles down and hit a crossbody from the top for a two count from referee Jessika Carr.

Metalik tried for a move, but AJ blocked it and Metalik took a bump. This was followed by some stiff kicks from Styles. He started focusing on the luchador’s left leg while they praised this move on commentary.

Gran Metalik started fighting back and he hit a DDT for a two count. The PC crowd was really into this comeback for Metalik. Gran Metalik pulled a rope walking trick and landed a great dropkick for another two count.

AJ Styles came back with strikes and put Metalik down with a clothesline. Then AJ got on the apron and looked like he was going for his Phenomenal finisher, but Metalik avoided it and landed an enziguri.

Metalik went for another move off the ropes, and AJ Styles knocked him out of the air. Then Styles locked on a Calf Crusher and it was over.

After the match was over, AJ Styles put a beating on Lince Dorado and he hit a Styles Clash while the PC crowd booed.

Shorty G was backstage and King Corbin asked him if it hurts to be on the sideline. Corbin said he thinks that Shorty can become IC Champion. Shorty asked why Corbin is acting all friendly. Corbin said that G gets overlooked. Then “Barefoot Idiots” come in and get all the hype and opportunities.

Corbin said he doesn’t want anything. He just knows facts. Then he reminded Gable that the King’s Ransom is on the table for anybody.

Hardy said he hasn’t felt this good in a long time. The Sheamus angle was hard for him because it was a reminder of his constant demons. He said sobriety is a constant challenge, but beating Sheamus in that bar fight is a reminder that he will keep fighting.

Hardy said he’s an alcohol, but he’s so much more. He’s a WWE Superstar and he’s grateful that his family and friends have gotten him to this point. He never wants to let fans down again. He said the struggle is real and he just wants to make the most of his life.

He said he’s grateful to be alive and well on SmackDown and then King Corbin came out because he’s a heel. He said if he has to listen to Jeff talk about sobriety so much his head will explode.

He said that Jeff is whining and crying about recovery. “Just shut up and deal with it.” He has to deal with Riddle who can’t find his shoes, and he has to wrestle that idiot Drew Gulak tonight. He’s losing his mind. Then he told Jeff that he’s disappointed in him.

Corbin said he would offer him the King’s Ransom to take out Riddle, but Hardy is too concerned with attending AA meetings and collecting coins. Then Gulak jumped Corbin from behind.

Gulak and Corbin started during the commercial, so we missed some of this match. Corbin used his heel tactics while Gulak really took him to wrestling school.

Finally, Drew Gulak lost to an End Of Days. Riddle jumped Corbin, and then Shorty G jumped in and took Riddle out with a rolling German Suplex.

Shorty G stood over Riddle and then he looked at Corbin and gave him a look. Shorty G just wants the money.

Big E vs The Miz

This was Big E’s first real steps in a singles push apparently. After a short start, Miz took some punches to Big E, but then E caught Miz with an abdominal stretch. He spanked The Miz to the “New Day rocks” chant.

Miz slapped Big E and then he tossed him over the top rope. Then Big E sent The Miz into the ring post and the barricade. Morrison kicked Big E after he threw Miz in the ring. This allowed Miz to hit a dropkick through the ropes.

Big E went back inside and Miz climbed up top to hit a move and get a two count. Big E put Miz on the apron and clotheslined him down. Then Big E nailed some shots on Miz’s chest and went for a splash, but Miz moved and Big E hit nothing but apron.

After commercial, Miz had Big E down with a headlock. Big E got up, and took a kick to the head for a two count.

Big E came back with some belly to bellies. Then he nailed a splash on Miz before getting the crowd going with a clap. Miz returned fire and nailed some Hey Hey Hey Kicks, but he missed the last one. Big E picked Miz up, but Miz got away. Then Miz wrapped E’s leg around the rope and kicked him before landing two running knees, but the third was met with an uranage from Big E for a two count.

Miz blocked Big E’s spear with a knee to the face. John Morrison nailed a kick on Big E and Miz hit a Skull Crushing Finale for a two count. Then Miz got on a figure 4 until Big E got a rope break.

Morrison almost kicked Big E again, but referee Charles Robinson caught him and threw him out. Miz wasn’t happy about that.

Big E rolled Miz up for a two count and then got a stretch muffler submission for the win.

Sheamus cut a promo about last week. He essentially cut a promo ending by saying that Hardy will fall off the wagon eventually so he’ll just sit back and watch it happen. Then Sheamus said that he’s the SmackDown locker room’s problem now. The Celtic Warrior is coming after everyone now.

Lacey Evans took Naomi down with a headlock and they returned to their feet. Evans tried to trap Naomi with her hair again between the ropes and the steps. Then Evans got back in the ring and wanted to win via countout.

Naomi got free and jumped in the ring where she launched against Evans. Then Naomi nailed a big kick that sent her to the floor.

Naomi avoided a women’s right and nailed her Rear View for the win.

Mandy Rose was in a segment backstage. Then out of nowhere, Sonya Deville beat her down and cut her hair with scissors. It was brutal. Sonya grabbed some hair clippers and went after Mandy Rose, but WWE officials including Adam Pearce (welcome back) jumped in to stop her.

Bayley and Cross got long intros and then they got started. Nikki got to work on Bayley first with some clubbing blows. Then she nailed Bayley with a dropkick and a monkey flip before Bayley got out of a neckbreaker, but Bayley tackled her and Nikki got to her first and rained down fists.

Bayley got outside and Nikki followed her. Cross smashed Bayley’s face on the apron and Bayley got back inside and hit a legdrop for a two count. They continued and Cross took control. Then Bayley left the ring, but Cross followed to take her out before posing on the announce table.

Bayley turned things around on Cross and beat her down in the corner before hitting a suplex for a two count. Then Bayley drove a shoulder into Nikki Cross in the corner.

Bayley missed a running elbow as Nikki moved. Cross hit some strikes and nailed a cross body for a two count. Then Bayley moved and Nikki hit the turnbuckle. Cross hit a tornado DDT on return and got a two count.

They moved to the apron and Cross sent Bayley plummeting onto the apron. Cross hit a neck breaker for a two count next. Then Cross found Banks’ ring, but she threw it at Banks instead of hitting Bayley with it

Bayley got on the announce table and taunted Nikki until Cross hit a leg sweep on Bayley to send her down hard. Banks tried to get involved, but Alexa Bliss pulled her down. Then Nikki hit a Cross Body and they traded roll-up two coutns.

After the match, Bliss tried to console Cross, but she shoved her down. Then the lights went out and Fiend showed up to get in Bliss’ face and be super creepy. She looked very scared and she shook her head “no,” but he gently put his Mandible Claw on her, and then took her down.