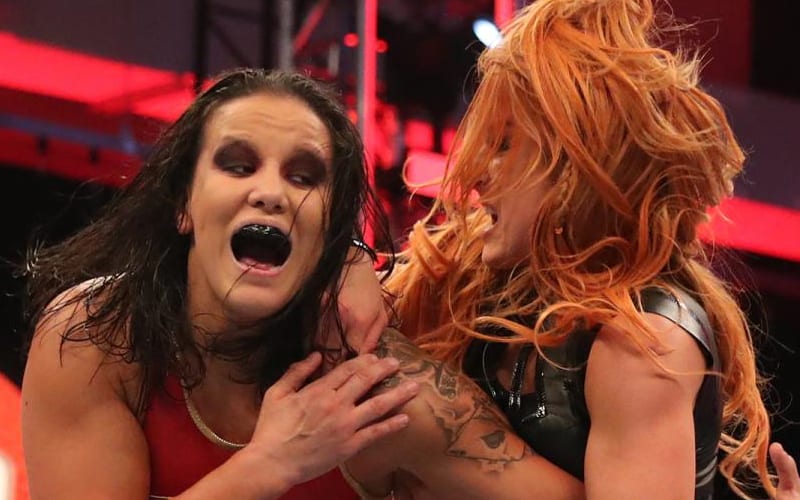 Shayna Baszler did not defeat Becky Lynch at WrestleMania. It wasn’t for a lack of trying on Becky Lynch’s part.

While speaking to the Bella Twins’ podcast, Becky Lynch revealed when she and Seth Rollins started trying to have a baby. It happened far sooner for them than they initially thought.

The Man also revealed that she pitched for Shayna Baszler to defeat her at WrestleMania 36. Those plans obviously changed, but it was her expectation to drop the title to the Queen Of Spades.

“Originally I was like, ok, well … I’ll wait til I’m done wrestling and then I’ll have a family. But then I started thinking, but wait, why do I have to do that? Guys don’t have to do that. Hell, I’ll just do it whenever the time feels right! So we started trying, and I just thought it would take a long time. And it didn’t. We were super lucky.”

“It happened before I would’ve expected and I was still the champ at the time. I actually thought that I was going to lose the title at WrestleMania, which I also pitched … but you know, plans change!”

Shayna Baszler was also slated to win the 2020 Royal Rumble match. She did not win as Charlotte Flair was victorious. The plans for Baszler to win Money In The Bank were also changed to see Asuka win and become champion.

Vince McMahon has apparently lost interest in Shayna Baszler. Let’s see if things improve for her as it becomes more evident that they need talent on the red brand.