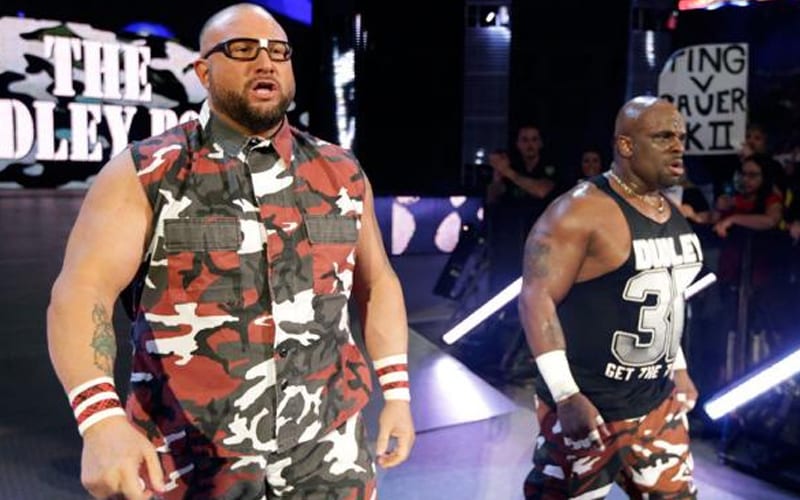 WWE likes to own everything that they put on television. This keeps any other company from making money off their ideas. Sometimes they will copyright an idea that was brought to them which transfers ownership and creates an even bigger issue if a Superstar wants to leave.

While speaking to Chris Van Vliet, Bully Ray opened up about the Dudley Boyz’ WWE exit when they went to TNA. Everything was going fine until they discovered that WWE wasn’t giving up their tag team name.

“WWE didn’t own the Dudley name, they bought it outright. The Dudley Boy name is original intellectual property of ECW and when WWE bought ECW out of bankruptcy court you get to purchase the assets.”

Bully Ray revealed that the Dudley Boyz were not released from WWE. It was a mutual parting of ways. After One Night Stand in 2005, they decided to “shake hands and call it a day.” Then they received a phone call saying that they had to figure out a different name.

“We parted on good terms and then they called and said that they own the Dudley name and I flipped out. I was on a plane. I was dropping F-Bombs and everything. I called a lawyer friend of mine who was a really, really strong intellectual property you know like attorney and he said, ‘Listen, I can get you this name back, but if I charge you ‘friend prices’ it will cost you and D-Von $100,000.'”

Bully Ray said the transition was “pretty seamless.” Fans knew who Bully Ray and D-Von were. They also had a very good idea why they weren’t able to use that old name. Vince McMahon’s collection of intellectual property is quite legendary.

In the end, Bully Ray said he can make an argument that Team 3d had just as successful of a run as The Dudley Boyz. It might have been nice if The Dudley Boyz kept their name, but that’s just not how Vince McMahon operates.