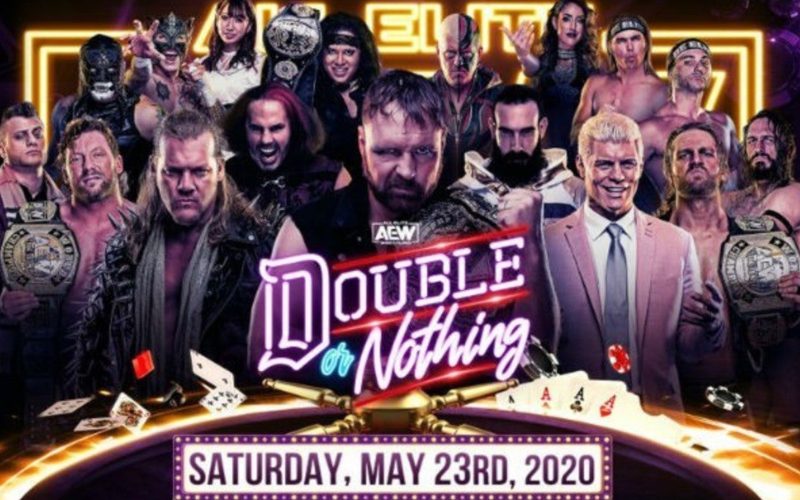 Welcome to Ringside News’ live results coverage of AEW Double or Nothing 2020.

AEW’s long-awaited return to PPV is happening tonight and the headline bout sees Jon Moxley defend his AEW World Championship against the Dark Order’s Brodi Lee. For weeks Lee has beaten and taunted Moxley, going as far as to steal his title belt. Tonight Moxley seeks vengeance but he has a big task in front of him.

The other big match tonight is the unique Stadium Stampede between The Inner Circle and The Elite. The match will feature a ring in the middle of a football field, and see both teams battle it out all over the empty Daily’s Place arena. This should be a blast.

One member of The Elite who won’t be in that match though, is Cody. Tonight the American Nightmare will face his most difficult challenge in AEW so far: Lance Archer. These two are set to duke it out to become the inaugural AEW TNT Champion. Both men have a lot to lose and even more to gain.

Other matches tonight include MJF Vs. Jungle Boy, a Casino Ladder Match for an AEW World Championship opportunity, Nyla Rose Vs Hikaru Shida for the AEW Women’s Championship, Penelope Ford Vs. Kris Statlander, Dustin Rhodes Vs. Shawn Spears, and Private Party Vs. Best Friends to determine the number one contenders.

And that’s the preview for the PPV. It all begins at 7 PM EST, and we’ll have play-by-play coverage right here. Enjoy the show!

Tony Schiavone, Excalibur, and Tazz welcome us to The Buy-In, and run down the card for tonight’s show.

We see Jake Roberts and Lance Archer earlier today, and Archer is chopping wood to prepare for his match. Roberts asks him if he wants to do something bad tonight and Archer starts smashing a toilet.

We start the match with Chuck Taylor and Isiah Kassidy, and they go through the motions of mat wrestling. Trent and Marq Quen tag in and the latter counters an Irish whip/drop-down to hit a standing moonsault. Quen goes to the apron but Trent brings him back in with a bridging fisherman suplex for a one count.

Taylor tags in and teams with Trent to hit a double-team elbow drop. Kassidy runs in and drops both Best Friends with an assisted sliced bread. Trent chops Kassidy, then hits a back suplex. Kassidy slams Trent and tags Quen, who takes Trent’s headband. Trent gets mad and throws hands but Quen knocks him from the ring.

Tag made to Kassidy and he goes out to throw Trent into the guard rail, but he bounces right back with a spear. Quen dives over the ropes with a suicide dive to Trent, then sends him back inside and tags himself off Kassidy. Trent and Chuck team to hit a double team superplex. Chuck tags in and beats Quen in the corner before hitting a suplex for a two-count.

Quen counters a tornado DDT and drops Trent with a dropkick, then tags Kassidy. Isiah comes in hot, dropping Trent, then flipping over the ropes onto Chucky T. Kassidy stops to pose, then gets back inside and hits Trent with a sliced bread variation. Tag to Quen and they hit a double-team flurry for a near-fall.

Trent hits both of them with back suplexes and tags Chuck. Taylor dodges Kassidy and throws him overhead onto Quen, then he and Trent hit Soul Food to Quen. A brief hug allows Private Party to come back and hit a double-team shooting star press. A few disjointed sequences and poor timing leads to Private Party hitting G9 on Trent, followed by a shooting star but Chuck saves Trent.

Tony Schiavone interviews Arn Anderson backstage and asks him about Lance Archer. Arn says smashing a toilet didn’t prove anything to him. Arn says he could spinebuster Jake, Jake could DDT him, or maybe Mike Tyson will knock either of them out. Thing could get hairy, but it will be decided in the ring. Arn says Lance might be the clear favourite on paper but you’d be forgetting about guts and tenacity. Anderson says Cody will start his own legacy tonight.