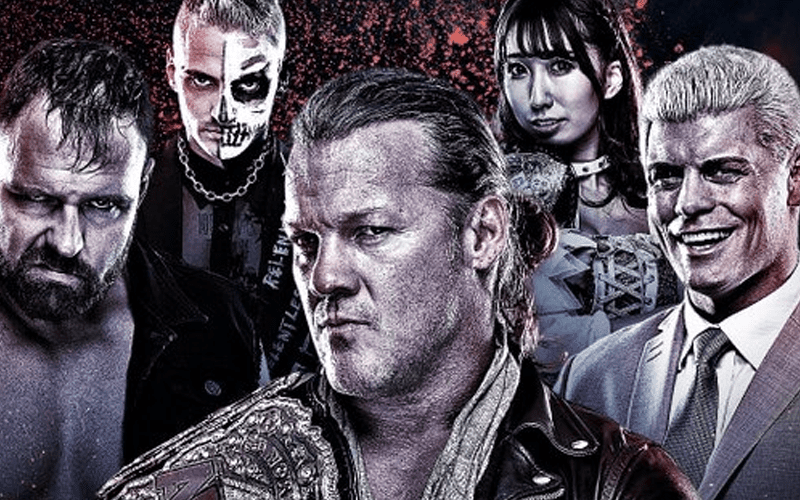 Tonight’s show will feature a Women’s Championship Match between Riho and Nyla Rose. On top of that, Hangman Page and Kenny Omega put their titles on the line against SCU. Elsewhere tonight, MJF will face Jungle Boy in a singles match, Last week Jon Moxley quickly beat Ortiz in a match, and tonight he gets the chance to do the same to Santana. And the final announced match tonight is Sammy Guevara Vs. Dustin Rhodes.

This week’s Dynamite opens with four men already in the ring, ready for tag team action.

After ring introductions, the match is about to start when The Dark Order appear on the screen. They wish both teams good luck and say they are closer than we think. They are awaiting the exalted one and will strike. Christopher Daniels leaves to investigate.

The match begins with Kenny Omega and Frankie Kazarian. The latter takes a headlock but Omega shoots him off and hits an arm drag. Kazarian whips Omega into the ropes and Scorpio Sky delivers a cheap kick to the back. Omega then boots him off the apron and looks to diver over the ropes onto him but Kazarian drags him back into the ring for a roll-up and a near-fall.

Kazarian drops Omega on the middle rope and Sky kicks him, then Kazarian hits a German suplex and knocks Page from the apron. Sky tags in and hits Omega with a jumping flatliner for a two-count while Frankie knocks Page off the apron again. SCU look for SCULater but Page comes back and knocks Frankie from the ring, then hits an assisted German suplex with Omega. The Champions look for the Buckshot/tiger suplex finisher but Kazarian pulls Page from the apron.

Omega knocks Sky to the outside, then looks to dive onto Hangman but Sky trips him. Sky then dives over the ropes onto Hangman, quickly followed by Kenny diving onto both he and Kazarian. Omega puts Sky back in the ring and hits a missile dropkick to the back, followed by a fisherman buster and a near-fall. Page tags in and Kazarian returns but Kenny hits him with the Kotaro Crusher. Hangman hits Sky with a fallaway slam, then tags Omega.

The Champions hit a rolling slam, shooting star press, then Sky gets his knees up to block Omega’s moonsault. Kazarian shoves Page from the apron, then gets the tag and forces Omega to the corner for repeated shoulder tackles. Kazarian sends Omega to the outside, where Sky rams him into the barricade and the ring apron. Back in the ring, Kazarian body slams Omega and hits a springboard leg drop for a two-count.

Sky tags in and tries to slow things down, kicking Omega and hitting him with a kitchen sink. Kazarian tags in and hits a running crossbody, followed by a body scissors. Kenny fights to his feet and reaches to his corner but Hangman isn’t there yet. Sky gets the tag and double teams Omega, but Kenny flips over Frankie and makes the tag to Page who just popped up on the apron.

Hangman comes in with repeated chops to both Sky and Kazarian, followed by a big boot to Kazarian and one to Sky coming off the middle rope. Page hits running lariats in the corners to both members of SCU, then catches Sky on his shoulders and drops him before hitting a standing moonsault for a near-fall. Omega tags in but Sky tosses him to the floor, meanwhile Page attempts the Buckshot Lariat but Sky ducks and Kazarian clotheslines him!

SCU team to hit a swinging DDT to Page for a near-fall. Backstabber from Kazarian, followed by a cutter from Sky. Omega tries to jump in but Frankie catches him with a cutter. SCU then get both Champions in submissions but Page slams Kazarian into the other two to break both holds. Omega tags in and hits a V-Trigger to Kazarian and a snap dragon suplex to Scorpio. Page attempts the Buckshot again but Kazarian ducks it, only to get caught with a pop-up powerbomb. Omega hits a knee to the back of the head, and Page dives onto Scorpio on the outside. The Champions hit a V-Trigger/Buckshot Lariat for the win.

Omega and Page leave after the win, each going different directions, meanwhile The Dark Order come down to the ring to Kazarian and Scorpio. They surround SCU but out come Chuck Taylor and Trent to even the numbers. The Blade, The Butcher, and The Bunny come out, followed by TH2. The Young Bucks are the last team to come out and chaos reigns as all the tag teams brawl and toss each other from the ring. The Bucks clear the ring before hitting dives onto everyone at ringside.

We see an interview from earlier today between Jim Ross and Santana. JR asks him what he meant when he said Jon Moxley would learn to live in darkness. Santana says 15 years ago he was at his lowest; living in a basement in the Bronx, no job, no money, no direction. One night he called his father at 3 AM and explained how he was feeling; every day was darkness. His father started going blind at 14 years old, and his sight was gone at 25. His father was stolen from him and he never got to say goodbye. Ross asks if Jericho is the person Santana should be angry with. Santana said Moxley had the chance to join the reason AEW is successful. He left it all at his feet. And tonight he promises he will learn to live in darkness.

Darby Allin has another video package, in which he can’t speak because his throat was attacked with his skateboard. He holds up cards that say he will get his revenge and asks Sammy Guevara for a match at AEW Revolution.

The match gets underway and Sammy immediately leaves the ring. He tries to sneak attack Rhodes but gets caught with a right hand. Dustin hits a lariat and a back suplex, followed by a running knee for a two-count. Sammy leaves the ring and decides he’s just going to leave the match but Dustin attacks him on the outside and gets in the face of Hager.

Back live and Dustin counters Sammy with a reverse STO. Rhodes rallies and delivers right hands, followed by a lariat, uppercut, and a snap powerslam for a near-fall. Rhodes makes the mistake of talking trash to Hager, allowing Guevara to get him up and deliver something of a backwards GTS for a near-fall.

Guevara goes up top but Dustin swipes his feet out. Rhodes climbs up top and flips Guevara over and off the ropes, but the Spanish God leaps back up with him…only to get front suplexed off. Rhodes hits Sammy with a Canadian Destroyer and hits The Final Reckoning for the win.

After the match, Rhodes grabs a microphone and tells “Jericho’s bitch” to turn around. Rhodes asks Hager if he’s ever going to get in a ring, or if he’s going to just keep cashing cheques. Rhodes says Hager is failing at MMA and failing AEW. He broke his arm and he wants a piece of him at AEW Revolution. Hager walks towards the ring but turns and walks off.

Tony Schiavone attempts to interview the captain charisma, Britt Baker once again. He asks about what she did last week to Yuri, and she says she did a favour by removing her decaying tooth for free. She rambles on about tooth decay and which exact tooth it was, before making fun of Schiavone for being a barista. Tony asks her about the women’s title match tonight, and she says it will be fantastic but, at the end of the day, they’ll both be number two behind her. That makes sense. She says she sees a lot of confusion in the cheesey Whataburger faces of the fans. She says she has two degrees and she was the first woman signed to AEW. This is her division and what she did last week was a statement. The fans chant “Whataburger”.

Dr. @RealBrittBaker providing dental care out of the kindness of her heart. #AEWDynamite #AEWonTNT pic.twitter.com/5hCXiIz5WY