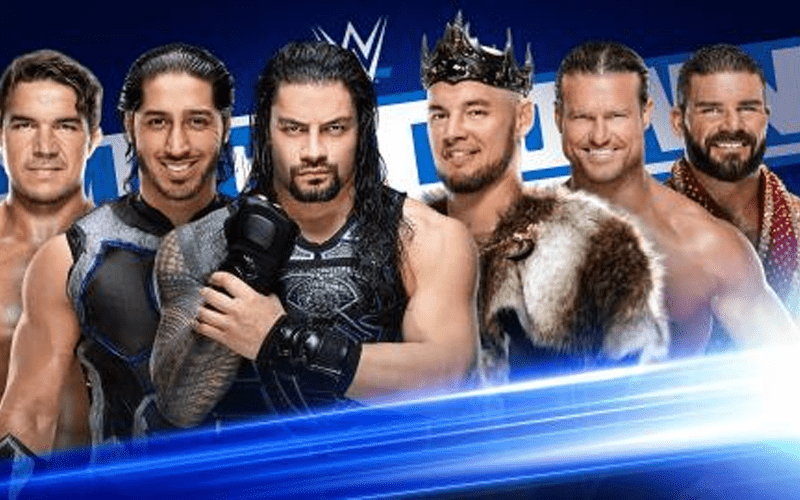 This could be an interesting show as WWE holds their first event in Chicago for Survivor Series weekend. The crowd is likely to be very excited, but we only know about two segments as of this writing.

Bray Wyatt has been summoned by Daniel Bryan. The two are going to have some sort of face-to-face, but we’ll just have to see which incarnation of Wyatt shows up.

The other thing we know is a six man contest is promised with Roman Reigns, Mustafa Ali, and Shorty G taking on King Corbin, Dolph Ziggler, and Robert Roode.

We could very well see some invasion activity as well because RAW and NXT Superstars are certainly in Chicago by now. You can check out the very short bullet pointed list from WWE below.

The SmackDown locker room was backstage and then King Corbin quieted everyone down. Roman Reigns led this meeting backstage to rally his troops as they all wore blue t-shirt.

They opened the gate and Roman said they’re inviting everyone in because they’re whooping everybody’s ass. King Corbin said this is a stupid idea. Then Sasha Banks spoke up and said they’re going to take care of business right now.

Banks said this is their ring and their show and NXT doesn’t have the guts to come out after they were dropped last week and then they went to “their house and did the exact same thing.”

Then Banks told Team RAW to come out to fight them right now since she knows they’re here. They didn’t come out and then Banks told “Captain Queenie” not to be bashful and come and get it.

Then Charlotte Flair came out in full gear along with Team RAW in full gear. Charlotte thanked them for the open door, but “it’s not like RAW wouldn’t have kicked it down anyway, am I right?”

So apparently, that’s your women’s Team NXT for Survivor Series and Ripley is the captain. Then all Hell broke lose.

Banks got out of the ring to give Rhea and Charlotte a chance to wrestle. Their respective teams surrounded the ring watching on. Flair kicked Rhea, but Ripley avoided a slam to drive Flair into the corner.

Banks got back in the match and Flair powered out then Banks hit a backstabber for a two count. She laid a punch into Rhea Ripley to have a standing dropkick returned from Rhea.

Banks sent Rhea out of the ring and then Flair blindsided Banks and drove her into Nikki Cross. Then Banks started yelling at Nikki and Dana Brooke and Carmella had to separate them.

Rhea started clubbing on Sasha and then Flair hit a moonsault off the top rope to the floor on both of them.

This match continued as they fought on. Ripley and Banks fought on the top rope. Banks hit her knee drop followed by Flair with a Natural Selection for a near fall.

Ripley kicked Flair in the head and caught Flair’s big boot only to catch a Natural Selection. Ripley rolled out of the ring and the Banks tried to steal a victory from Flair, but she ended up in the Figure 8 and then Ripley slid in and made the pin on Flair as she held her shoulders down while doing the Figure 8.

After the match, Banks and Flair kept fighting and then everyone brawled in the ring. The RAW Superstars ran off and the SmackDown Superstars were left alone in the ring to celebrate.