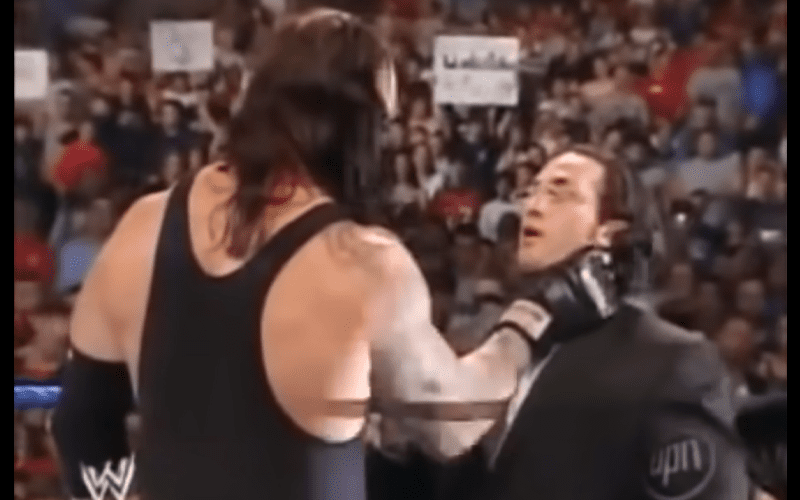 WWE will often bring in local wrestlers to play the roles of enhancement talent or other extras. There is a reason to pay attention to who’s getting those spots because you never know who might return as a big star on their own some day.

Tommaso Ciampa will always remember his first segment in a WWE ring. It was a pretty important segment and he had a key role. His task was to play an attorney and stand face to face with The Undertaker. Ciampa was only 20 years old at the time and he told the entire story to the State of Combat podcast.

“I was 20 at the time, they happened to be in town and at that time I was living close to Boston, Massachusetts. I believe that the show wasn’t that far from me. I was training at Killer Kowalski’s old place, and at that time it was the Chaotic Training Center but now it is the New England Training Academy, but we were kind of the feeding ground. Anytime WWE was in the northeast area that is who they would call,. They would call them for extra talent.”

“Luckily for me, I have always felt comfortable around the microphone, so in that part I wasn’t nervous, particularly because I had a script that I was reading off of because I was acting like a lawyer that day so I didn’t even have to memorize the lines.”

“But the day itself was crazy, because once I got picked, it was probably 4 pm at the time. It was an important angle for WWE because maybe a week or two prior, Mohammad Hassan and Davari had done something to upset the executives or whatever it was at the time, or maybe it was UPN, or whatever it was. It was around the time of the terrorists so it just didn’t sit well with people.”

“This lawyer thing had to be an apology that came off sincere, and also in the wrestling world, it had to make sense and also for The Undertaker to come out. I rehearsed that script in front of everybody. I did a solo in front of Vince McMahon in his office. I did an in-ring with The Undertaker, Vince McMahon and Triple H. Looking back now, it’s like I see how big of a deal it was and how crazy it was to have that one-on-one time with everybody as a 20-year-old kid on the independents. It was wild. Everyone treated me incredibly well. I remember that they didn’t like the suit that I had on so they went and bought me a suit and let me keep it.”

The segment ended up going off without a hitch and 14 years later we can remember it a little differently. If you need a refresher, you can check out the clip below to see a young Tommaso Ciampa at work as an attorney in WWE.