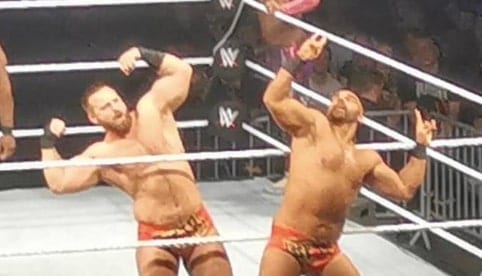 Dash Wilder & Scott Dawson have never really cared all too much for sticking to the status quo, and instead, they’d much rather forge their own path – especially when it comes to their tenure in WWE.

The popular tag team are constantly reinventing the game and they’re constantly giving fans a reason to talk about them, whether it be on social media or within the general sphere of the WWE Universe.

In their latest act of defiance, the team has decided to push the boundaries a little bit more by paying tribute to a fairly notable team that currently resides in All Elite Wrestling.

WWE decided against showing them do the pose, as you can probably imagine, at the live event in Zurich. It’s little things like this that continue to indicate where Dash & Dawson’s heads are at, because they’re obviously still somewhat campaigning for a match between themselves and the Bucks to happen in some capacity.

It’s pretty much nailed on that it’ll happen before one team out of the two retires, and right now, it seems much more likely that The Revival would jump ship to AEW – because it doesn’t really make sense for the Bucks to leave a promotion that they pretty much helped to start.

It could be a decoy and The Revival may just decide that they want to stay in WWE for the remainder of their careers, but part of this pro wrestling game is the speculation and the sense of the unknown. You’ve got to love it.