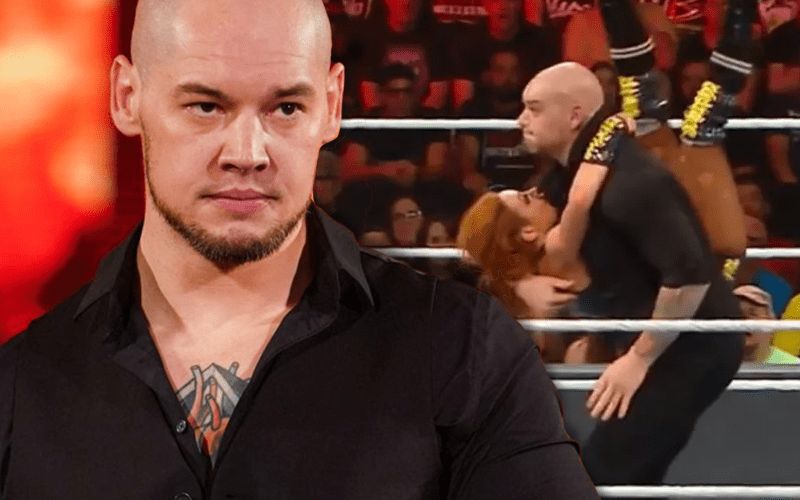 Becky Lynch might be The Man, but if a man actually hits her with a devastating finishing move then that is not okay.

Baron Corbin and Lacey Evans took on Seth Rollins and Becky Lynch at Extreme Rules. This was a No DQ Winners Take All match and it got pretty crazy. One of the climatic spots included Corbin nailing Lynch with an End Of Days.

While speaking to Not Sam Wrestling, Baron Corbin revealed that people really showered him with hate after he gave Becky Lynch an End Of Days. In fact, The King Of The Ring had to hand some death threats off to WWE’s social media team so they could handle things from there.

“I was curious about the reaction. It was one of the craziest reactions that I have ever heard. When you stand behind her and I’m getting up behind her and when I snatch her and the fans are yelling, it’s almost dead quiet for a second. They couldn’t believe I had done it. They popped and then booed. It was the most confusing and greatest reaction of just pure, natural excitement and hatred.”

“I even had to give some stuff to our social media team because I received death threats after that; it was insane. People went way overboard, but people were like, ‘I’m coming to Raw to stab you.’ It was crazy. I can’t remember but I called Seth Rollins a piece of sh*t or something. I don’t know what it was, but I was so excited when I did that and the reaction was so unreal and loud that I turned around and I was mad and whatever I was feeling, it came out and it was so funny because it was totally natural. But I had to click back into the zone. It was a surreal moment that I will remember forever.”

It was a rather shocking moment to see Baron Corbin hit Becky Lynch with his finishing move. It was definitely something that we didn’t see coming.

Baron Corbin shouldn’t have had his life threatened for pulling off the spot, but it just goes to show that some people take pro wrestling really seriously. It’s also a good thing that WWE seems to have a plan in place if a Superstar has their life threatened.