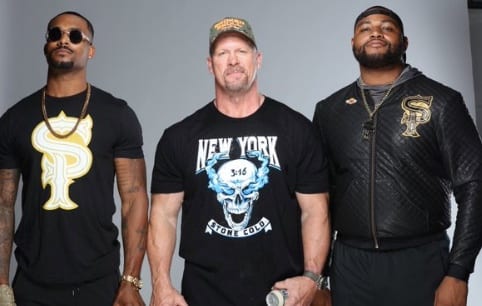 The Texas Rattlesnake is well known for being one of the biggest names in the history of the business, and any time we get to see him interacting with the stars of tomorrow, it should be seen as nothing short of a blessing.

In addition to appearing on screen, Austin also took the time to hang out with a few guys and girls backstage – hopefully offering them some words of wisdom in the process.

For a few years now it has felt like The Street Profits were capable of doing so much more than they were down in NXT, and now, it would appear as if it is their time to shine once again.

There’s still a long way to go before they can be viewed as a top tag team within the realms of WWE’s main roster (mainly because we don’t even know if they’re on the main roster permanently just yet), but interacting with someone like Austin isn’t exactly going to hurt their overall trajectory.

With All Elite Wrestling being set to put a whole lot of focus on their tag team division, you’d have to imagine that WWE will attempt to pull out all of the stops in order to try and counteract that.

If that leads to teams such as these guys being given more opportunities to shine on a week to week basis, then we’re all for it.