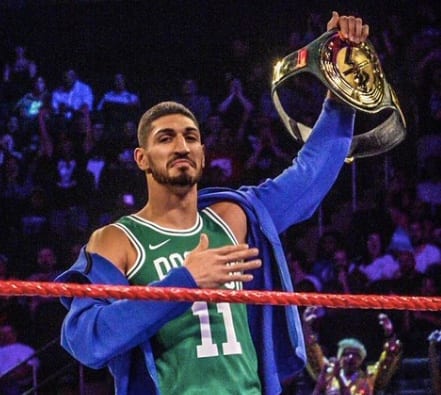 It’s always interesting to see the reaction that people have when stars from other sports try to test their hand at professional wrestling, mainly because a divide seems to be formed within the general fanbase.

That seems to have been the case with NBA sensation Enes Kanter, who made his presence known last night on Monday Night RAW before the show even went on the air. The former New York Knicks star returned to Madison Square Garden and was able to capture the 24/7 Championship from R-Truth, only for Truth to win it back.

It’s been well documented that Kanter has been entertaining the idea of a transition over into pro wrestling, with Paul Heyman being one of his biggest advocates.

Kanter clearly believes that there is going to be a successful run in the industry within the next few years, when he eventually decides to hang up his sneakers and walk away from basketball.

There will almost certainly be a place for him in WWE, and the relationship between the two parties already appears to be forming quite nicely. Again, there’s going to be a big learning curve for him, but that kind of thing is to be expected.

Truth, on the other hand, is now a 15-time 24/7 Champion, and we honestly believe that he’s only just getting started. The belt may have only been around since May, but there is definitely no way that the championship could’ve been as successful as it has been without Truth – and potentially Drake Maverick.