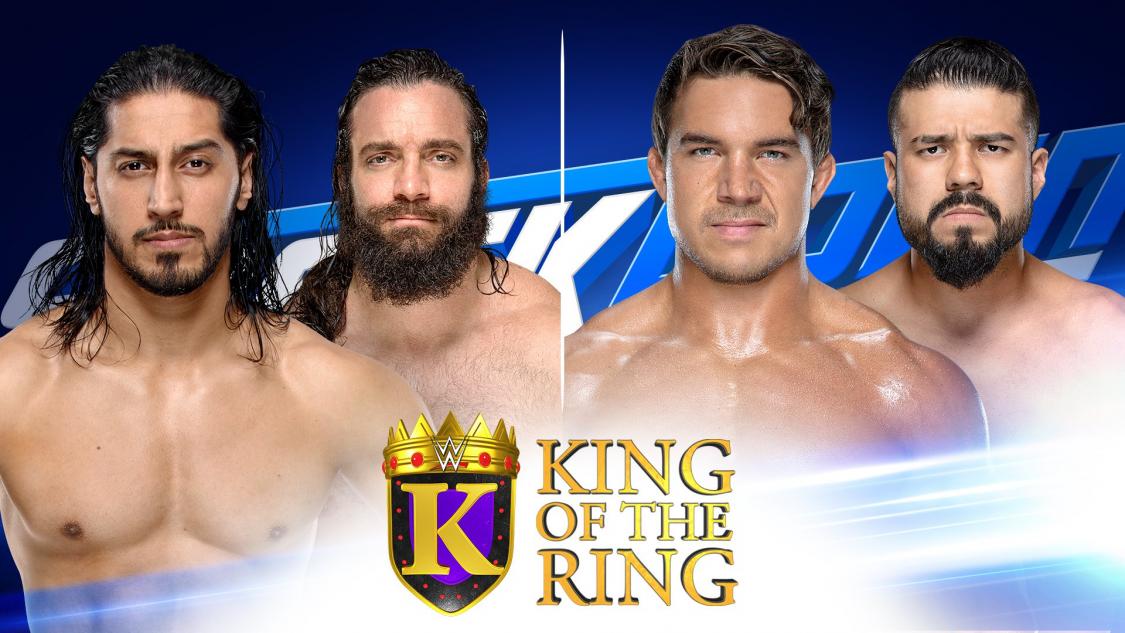 The SmackDown Women’s Champion Bayley is now a heel. So, that should be plenty interesting as we see what is to come in that storyline. If anything, they might have fixed an issue WWE was going to have at Clash Of Champions.

Daniel Bryan will be looking for an apology from Roman Reigns on SmackDown Live tonight. Let’s see if he gets it.

We also have two King Of The King quarterfinal matches. Elias vs. Ali and Chad Gable vs. Andrade are on the books for tonight.

Fans should expect so much more as WWE continues rolling on toward Clash Of Champions on September 15th. Come back at 8:00 PM EST and we’ll start the live results as the show kicks off.

They played a video promo about Bayley’s heel turn.

Bayley came out first and she was happy and had the wacky waving arm flailing inflatable tubemen. She was smiling and doing her same old Bayley entrance stuff, but the crowd didn’t seem to be with her too much.

The crowd booed Bayley, and she let them. “I don’t get it, you see that’s really confusing,” she said and then people chanted more. She said that we should have seen her heel turn coming because she’s got Sasha Banks’ back.

Bayley said she’s trying to give people opportunities and then she said “think about the kids.” She said every time she steps in the ring she’s trying to make people feel like she did when she was a fan. Now she’s the role model trying to show people’s kids what it’s like to be loyal and that’s why she couldn’t turn her back on Banks. She wants to put the division and title on the map because we deserve a champion with the same name nonrecognition as Becky Lynch.

She’s going to beat Charlotte Flair at Clash Of Champions because Flair has never been the kind of role model that she’s trying to be. Then Flair came out to the ring.

Flair owned up to being the Queen of selfishness, but “what you see is what you get” because plenty of people have said a lot about her. Then she said Bayley needs to hug her title tightly because at Clash Of Champions… enter Sasha Banks to a huge pop.

Flair went ahead and took out Bayley with a couple right hands before Banks got to the ring, then Charlotte Flair took out The Boss. Suddenly, Bayley jumped in the ring with a chair and laid out Flair before giving the chair to Sasha so she could smash Flair a bit.

Huge “Becky” chants started and then they closed up the segment with Flair laid out after a ton of chair shots from the Boss n Hug Connection.

Elias took it to Ali in a big way and brutalized him around the ring for the first part of the match. They went to commercial break and then Ali had his comeback.

They battled on the top rope and Ali hit a 450 to Elias’s arm and then he brought Elias to the ground and applied a crossface on Elias until he got to the bottom rope.

Eventually Elias jumped down onto Ali to the outside, but Ali returned fire with a kick. Then Ali climbed to the top once Elias rolled in an he missed a 450.

Finally, Elias hit a Drift Away and won the match.

Mandy Rose and Sonya Deville took control of Nikki Cross early on in the match.

Bliss got the hot tag and she started taking Mandy and Sonya out with kicks and forearm shots. Nikki stopped a move from Mandy Rose and left Sonya and Alexa in the ring together.

Bliss hit a DDT and climbed up top. Mandy and Nikki fighting on the outside distracted Bliss and Sonya got her knees up on the Twisted Bliss.

Then Mandy got the tag and kicked Bliss for the win.

Chad Gable and Samoa Joe had a little segment where Joe made fun of Chad for being short.

The Viper was very over with this crowd. He cut a promo on Kofi and showed a clip before daring Kingston to come out.

Kofi’s music hit, but he came out while being pummeled by The Revival. Then Randy Orton screamed “Stupid” over and over again while stomping on him. He said that Clash Of Champions he’s going to beat Kofi once and for all.

Kofi fought back for a bit, but it didn’t work very well because the numbers game quickly worked against Kofi. This was followed by a Super RKO before FTRKO posed on the turnbuckle.