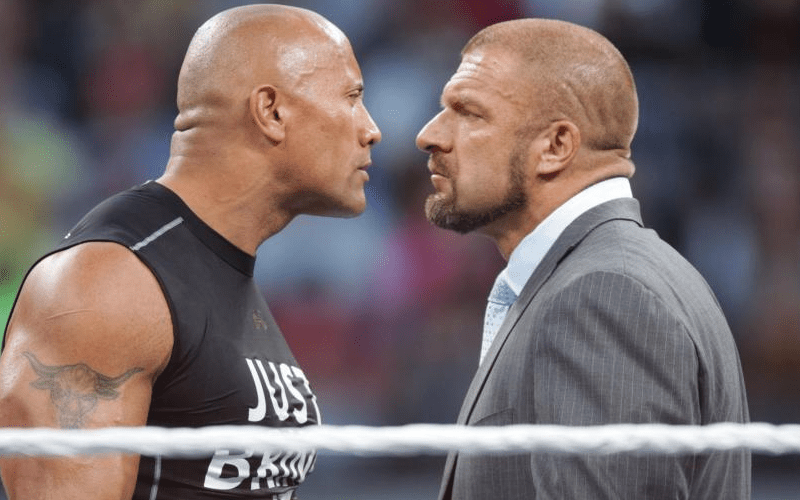 Triple H and The Rock have been involved in plenty of WrestleMania moments, but one big match was scrapped just a couple of years ago.

WrestleMania 32 should have seen The Rock vs Triple H, however, it never happened. Then just two years later, The Rock couldn’t be Ronda Rousey’s partner against Triple H and Stephanie McMahon.

Although he would have loved to face The Rock once again Triple H revealed to Talk Sport that it all had to do with The Great One’s incredibly busy schedule.

Scheduling. I don’t remember the details of it but it was one of those things that Rock and I had talked about doing to the point where we did the backstage promo [on SmackDown] where it was like let’s throw a seed out here and see what happens. And we did and it blew up and we talked about it some more and then scheduling just got in the way. It really wasn’t until much later. At that point, we were like over a year away from that WrestleMania. It wasn’t until the following year about three or four months away from WrestleMania that Rock was like ‘Man, it’s just not going to work. I just can’t. All my stuff, my movie thing has changed and I just can’t make it work anymore.’ So, it was what it was.

I would love to have done it, it would have been a blast to step in there with him one more time and tear it up. The cool thing about the place where I’m at in my career, you sort of appreciate those moments a bit more. When you’re busy doing it… you appreciate it, but, man, you’re in the thick of it and it’s tough. When you get later in your career and you start to realise these moments come now and then, there might not be more, you can appreciate the moment more. It’s a lot more difficult – you put a lot more pressure on yourself too when you don’t do this a lot.

But to sort of go back in time and have that match with Batista, when Dave called me about doing that and we spoke about it, I think for both of us just an ability to go back in time but at a point where we could both appreciate it and just do that again, relive that moment, and then go out there and do it in a way where you don’t embarrass yourself [laughs]. But I think it’s even more special now when you have the opportunity to do it in that manner so stepping out there with The Rock, which for me, you know, there’s guys I look at in my career, it was so competitive at the time for all of us but I don’t know I had more fun with anyone in the ring [than Rock].

I worked with him so much and so many times from him being Rocky Maivia to me being Hunter Hurt Helmsley and all the way through, we just kept going back to each other. And it was always magic I felt like. I feel like we both had that comfort level with each other where we could just get in the ring with each other and have a blast and create something special. So, to do it again would have been something special but sometimes it’s just not on the cards.

Perhaps The Rock could make a return for another match, but that might be wishful thinking. Dwayne Johnson’s Hollywood career seems to only be getting bigger and it doesn’t appear that we will see The Great One’s return unless it’s just for a one-off appearance at this point.