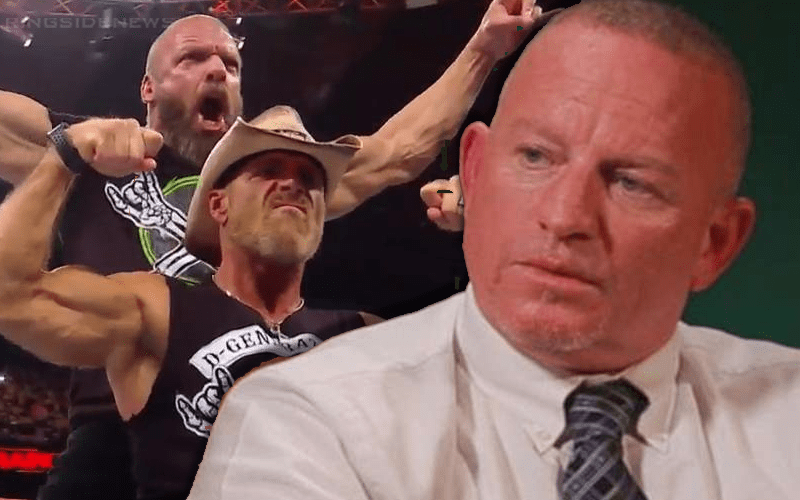 D-Generation X are now WWE Hall Of Famers and they left a big mark on the HOF that might never be cleaned off. Their legacy is that of immaturity and breaking kayfabe as they continued to bend the rules and have a ton of fun throughout the years.

While speaking to X-Pac 12360, Road Dogg revealed one thing that frustrates him to this day about how D-Generation X is remembered and referenced.

“I’ll tell you what does frustrate me is when people say ‘DX’ and they’re just talking about Hunter and Shawn. Like that does frustrate me. Because whether we’re the coolest or not I do believe we were an integral part of that faction in a way that did make it cooler.”

“I don’t like to say we were the coolest, but I do like — again, Hunter might listen to this so I don’t wanna… well it’s not from me… but I do. Because Vince would often times go, ‘Yeah we’re gonna do DX and DX will come out and Shawn and Hunter are gonna come out’ and I would literally say in the meeting, ‘Hey I was in DX, I don’t know if you remember that, it was me, I was in there.’ So yeah, that’s frustrating.”

The New Age Outlaws made D-Generation X a lot better for some fans and without them in DX’s weekly promo fans might not have yelled “Suck it” quite as loud.

So the next time you think about D-Generation X it might be a good idea to realize that there were more members than just Triple H and HBK. At lease WWE did it right for the Hall Of Fame as all members received an induction including Chyna.