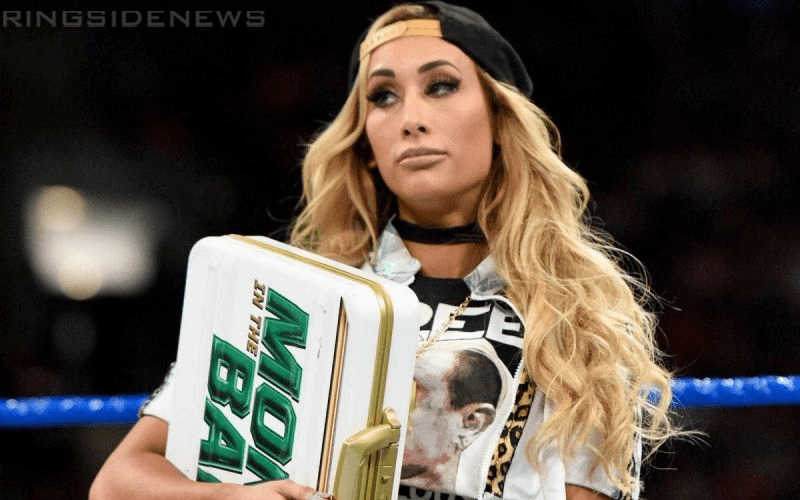 Carmella became Ms Money In The Bank and she held that briefcase far longer than most do. However, once she cashed it in, Mella became a strongly despised heel champion.

While speaking to Boston’s CBS Local, the former SmackDown Women’s Champion talked about how the fans treated this huge moment in her career. It seems that they were on board with her being Mella In The Bank, but they were not huge fans of her once WWE actually places the title around her waist.

Gosh. It’s just so funny, because when I had the Money in the Bank contract, I felt like, I try not to read all the tweets. But if we’re talking about this, then everyone was like, “Oh, Carmella deserves this. She deserves an opportunity.” And then I cash in my contract, and then everyone’s like, “Oh my gosh. I can’t believe she’s champion.” I was like, all of you people were just sort of rallying behind me and trying to get me, wanting me to win the title, and then I get it, and then immediately they’re all hating on me. But again, they’re always going to be hating.

People said I didn’t deserve to beat Charlotte, I didn’t deserve to beat Asuka. But I did it, and it lead me to where I’m at and, at the end of the day, what they think is not real. What I’m doing, my hard work, and being here at the Boys & Girls Club and giving back to the community, that’s the stuff that’s real. It doesn’t matter if people think I’m worthy or not of being champion.

WWE fans can be fickle and not know what they want until it is right in front of their face and they are presented with something different.

Carmella is looking for a MITB repeat this year and she even dyed her hair back to blonde in the process. If Carmella sees another heel turn it could open the door for her in a big way to not only become a two-time Ms Money In The Bank, but also prove that Mella is money at the same time.