Knight informs that working for WWE is the goal for so many wrestlers, adding that everyone wants to work at WrestleMania. The security of working there is important as well, because if you get injured while working on the indies there’s no money coming in. She points out that WWE can’t deny female indie performers anymore, and if you’re a good worker you can make it there now which is so great, whereas in years past looks played a huge part. 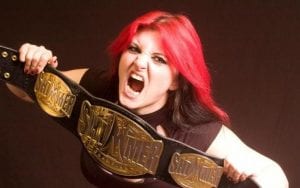 Knight’s start in the wrestling business came about when she met her husband. She left a regular job and went with him on the road and for the first 4 years he would train her as they went about their business on the road. She notes it was a long 4 years because women wrestlers weren’t looked at the same back then.

Her husband taught her how to wrestle like a man so people wouldn’t criticize her, and they wrestled roughly 340 days a year. She notes that they’d be begging for a day off, but it was impossible not to get better because they were working everyday and honing their craft.