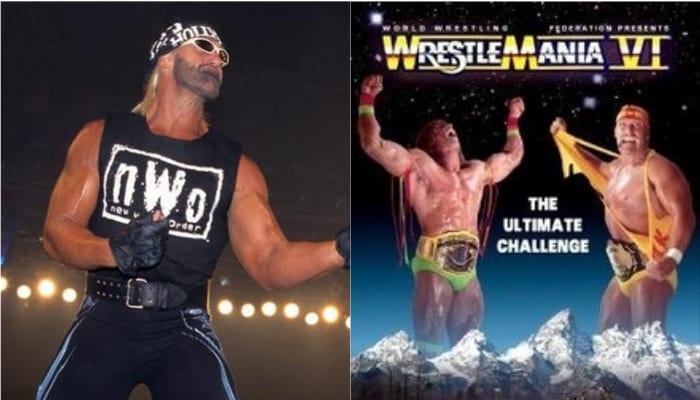 Hollywood Hogan, Kevin Nash, and Scott Hall made up the original nWo members in WCW, but it took a big heel turn from Hogan to make it happen.

Hogan recently appeared on Apter Chat once again where he spoke with his old friend about turning into Hollywood Hogan in WCW. But apparently, Hogan had plans way before that to take on the Hollywood persona, even in WWE, 6 years before it finally went down in WCW.

“Me turning heel was Eric [Bischoff] was beating on me for a couple months trying to persuade me. You know I’d been through the whole WWE departure and the Turner thing when I got the belt from Flair and then all of a sudden, the red and yellow was starting to get a few boos you know but I was in a turmoil. I thought man this isn’t going to be the greatest thing for my career, it’s going to ruin it.”

“I was on the fence about turning heel but the Hollywood Hogan character man that was somebody I wanted to do after WrestleMania VI with The Warrior.”

“I went to Vince and I want to be ‘Triple H’ Hollywood Hulk Hogan I want to turn heel and Vince went, ‘no man you can’t turn heel there’s no way it would work.’ I wanted to walk away from the ring, hand Warrior the belt, look up to god, and then left the ring. As I left the ring you’ll notice a lot of people following me watching me walk away. I would have loves to get half-way down that aisle and turned around and went back. You know, but that’s what I wanted to do but Vince had other plans.”

Of course, Hogan’s heel turn had to wait which could have been why it made such a huge noise when it finally happened. Hunter Hearst Helmsley became the first “Triple H” in WWE and now Hollywood Hulk Hogan, but things worked out for the best in regards to history.

But you never know how different things could be today even if McMahon would have accepted Hogan’s pitch to turn heel and beatdown the Ultimate Warrior to close out WrestleMania VI instead.