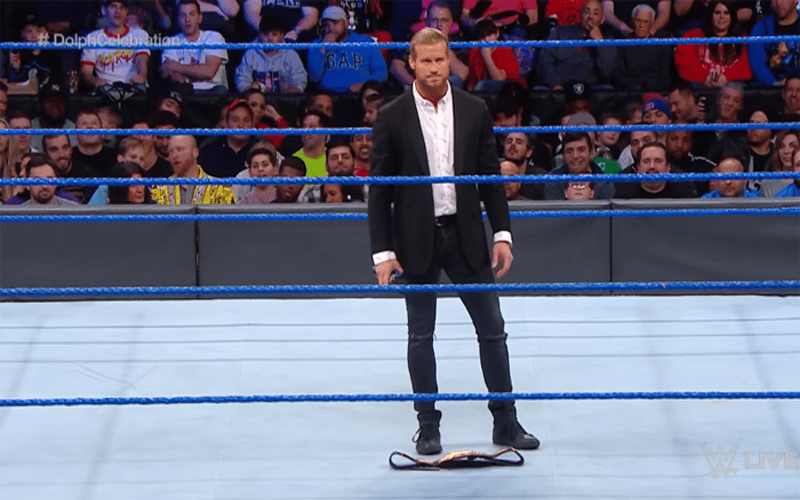 RAW Tag Team Champion Dolph Ziggler was recently part of a media call in promotion of RAW last night. Akhilesh Gannavarapu of Wrestling Inc was on the call and asked Ziggler about the incident on SmackDown Live last year where he vacated the United States Championship after capturing the title.

To begin with, Ziggler was asked if his partnership with Drew McIntyre is vindication for him, given Ziggler has felt the need to prove himself.

“No, I mean, it worked out as great partnership. We watch each other’s backs, and we got the same goals in mind. But of course, just getting to the WWE… everyone gets here differently. Some people pick up a flier, some people work their whole life, some are fans their whole life. Some people come from football or MMA. I’m someone who doesn’t go away, and constantly outworks everyone in the entire locker room. And once in a while, if the opportunity goes in our way, I make the most of it.

“Some of us have to go away to learn what we’re missing, and come back and shut everyone down. Drew has been the best example in recent memory, or certainly that I can think of, of someone who wasn’t bad. He loved wrestling, he wanted to do it his whole life. He just got more focused, and got so much better at it that he’s unstoppable now.”

Clarifying the idea that he has a chip on his shoulder, Ziggler explains that he isn’t sure he ever had it. He just feels as if he is in a better position now to showcase his abilities than he was when he first started.

“I don’t know if there’s a chip on my shoulder now. I didn’t think there was one eight years ago when I had to stay there. There’s nothing different now; I just get more TV time to do the awesome things that I do. So, I mean, there are always difficulties, and I told this to the younger guys in the locker room at lunch. That even if you get what you want, even if you’re going against the opponent you want, being in the right part of the show, TV time, or becoming a star, winning championships… it just gets harder after that, and that’s the thing.

“I go home, and some people say that was my best match. But I go, ‘I could’ve been better here, I could’ve been better there’, and that is the sign of someone that constantly wants to be better, and constantly wants to make this sport and industry better. So, I will never be satisfied. Even if tonight on RAW, I beat Roman Reigns, and we beat the hell out of each other, and I become the Universal Champion, I will go home and focus on the things I did wrong, to make myself a better champion.

“So it’s… I don’t speak too much, but I live for this business.”

“Hang on a second, all the time I took off… you know I was gone for three Mondays, right? Just three weeks. You know that’s not a lot of time off, right?

“So, when I begged to go away for a long time, I wanted something special to happen. I wanted to go away, work on myself, make myself stronger, make my character better. Using that entire process. And when I was inserted into the United States title match, I said, ‘What can I do, to make this match be more prestigious? How can I steal this title away from those two other Superstars?’ And when I found a way, the reaction was there, but it wasn’t quite what I wanted.

“I thought to myself as I got close to the ring, ‘Walk away and don’t say a word. That will get everybody talking. That will be similar to going away for three months, going away for six months. Going away for a year or two. As much as I can, without giving up and breaching my contract.’

“So I did what I could, and I slammed that title down and I walked out. And that was the most anyone talked about me in seven years, and I really wanted to capitalize on it. I felt special about it. We went in a different direction, but sometimes you do everything you can within your power, and I without a doubt have always done everything in my power to make the titles mean something, make those memorable moments mean something, and have my career be the best it can be. So, some things are out of my hand. I don’t own the company. But I wanted that to be special, and it was. It just could have been hell of a lot more special.”

Ziggler and McIntyre also make up two-thirds of The Dogs of War, and following what transpired on RAW this week, their enemies in The Shield may not be around for much longer.

Do you think Ziggler has what it takes at this stage in his career to be a World Champion again? Have you enjoyed his run as Tag Champion alongside McIntyre? Let us know your thoughts, opinions, and reactions in those comments below.