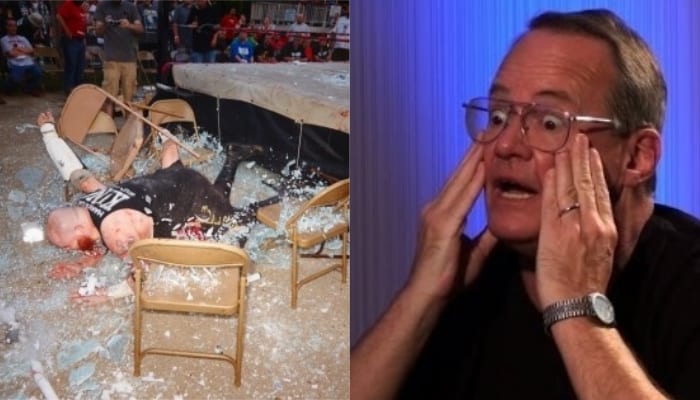 Jim Cornette is not a fan of hardcore wrestling with no story to tell. He’s been very vocal about the usage of glass tubes, barbed wire, baseball bats, and all sorts of violent instruments with no room for actual wrestling moves. So you’d imagine how he might relish the chance to tell a group of those fans how he feels about them to their hardcore faces.

Cornette recently revealed on The Jim Cornette Experience that he received a very interesting offer to participate with one of those companies infamous for the kind of hardcore wrestling he hates.

“Two different people came up to me at the Keystone Comic Con in Philadelphia with a message from the owner of Combat Zone Wrestling who wanted to — apparently they’re having their big gimmick of death whatever they do where they just do even stupider stuff to each other than usual with the barbed wire and the broken glass and setting each other on fire and whatever the f*ck they do that we see on the internet.”

“They’re having the big one coming up this year and the owner of Combat Zone Wrestling thought it would create such buzz and talk if I were to come out and announce that I had either bought the thing or taken over the thing in some kind of way that I was the boss now, right?”

“They pitched this to me on this guy’s behalf. and I have to admit that the first thing that struck me was, ‘my god how much fun that that would be to go out in front of that ilk of people both in the locker room and in the f*cking seats and tell them all exactly what I thought of them with them knowing I was shooting every step of the way. That I must admit was an attractive thought at one point. Can you imagine? I’d have to get my bulletproof vest back.”

It might be very interesting if Cornette did take CZW up on their offer. After all, it could result in some amazing viral videos.

But then again, Jim has been through a huge amount of heat in his life where he even needed to wear a bulletproof vest, but who knows what kind of danger that kind of crowd could be to Cornette after he shoots hard on them in a promo from the ring. After all, he would still need to figure out a way how to get out safely.