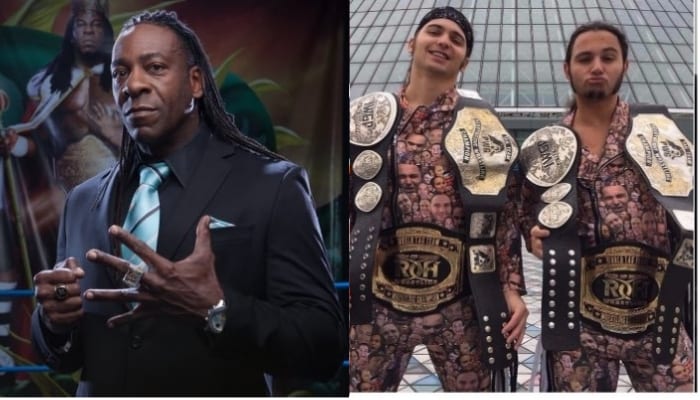 The Young Bucks have come a long way since their debut. They were once thought of as too small and Generation Me could have been their finest moment in the pro wrestling business, but Nick and Matt Jackson didn’t let their size get in their way and instead jumped over to New Japan Pro Wrestling where they became worldwide Superstars on their own. If you add in their success in Ring Of Honor and how well All In turned out for the brothers, it’s easy to see that The Young Bucks have figured out something special.

But as they spoke to Booker T on his Heated Conversations podcast, they both credited a controversy about Booker saying they wouldn’t shake the 5-time World Champion’s hand backstage to helping elevate them, even more, when they were starting to figure things out.

“Matt and I still get some wrestlers that come up to us for the first time and they’ll say, ‘hey I didn’t think you shook hands,'” Nick Jackson said as his brother Matt elaborated on how a simple controversy from Booker T sparked their careers.

“You know what? When you can make the fans believe it, but also make the boys believe it you know you’re on to something good. So people really started — we started getting a bad reputation about it and at times I asked Nick I said, ‘are we taking this too far? Like will this affect our bookings and our work?”

“I’m like no, and we’re like ‘you know what let’s just commit to this thing and see how far it takes us and immediately we just saw a difference like everybody wanted to talk to us and interview us. Everybody wanted to book us all of a sudden, our price is going up.”

As time goes on it seems even more likely that WWE would be wiling to throw a ton of money at The Young Bucks. They have built an empire around their name. But in a lot of ways, they could have Booker T to thank for giving them a reason to go heavy in a new direction. It’s kind of strange to think about the fact that All In might have never happened if Nick and Matt Jackson would have just made a point to shake Booker T’s hand.