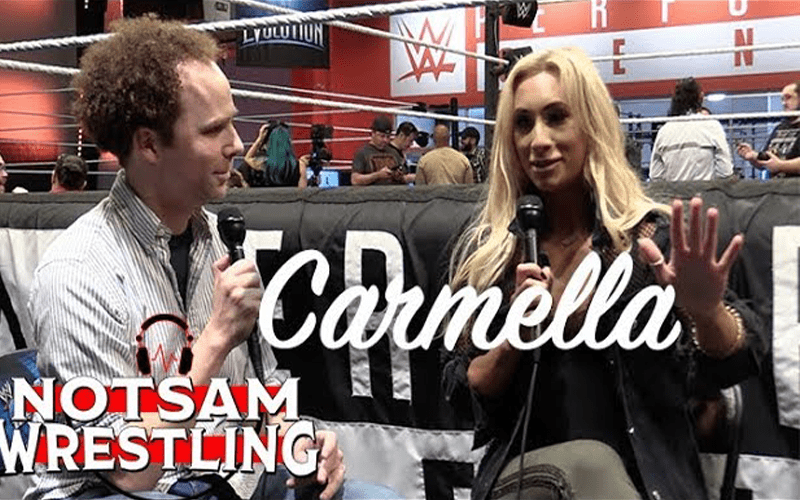 Former SmackDown Women’s Champion Carmella was recently interviewed by Sam Roberts at the WWE Performance Center, where she spoke about her time as Champion, her reaction to people telling her she can’t wrestle, and explained whether she misses James Ellsworth and if Becky Lynch’s character is justified for acting the way she is right now.

To open the interview, Carmella and Roberts reflected on how much has changed in the Superstar’s career since the last time they sat down together for an interview.

“It’s just so cool. I remember- yeah, we were in the middle of the ring over there. I was wearing a ‘how you doin’?’ shirt. Like, that’s so crazy how much has changed. But yeah, like last time I was here I was a manager. That is what I was doing. I barely got an opportunity to have matches on NXT TV or I never wrestled on a TakeOver. Gosh, this last year has been so crazy.”

Carmella reveals if she thought she’d reach her goal of being Women’s Champion so quickly.

“Always, I always knew that in the back of my mind. It just seemed so far away and it just felt like- I knew it would happen someday, but it just- it felt like a distant dream that you never think is actually gonna come true, and it did.”

When Carmella became Champion, a large percentage of the fanbase started to chant that the ‘Princess of Staten Island’ couldn’t wrestle. The former Champion explains how it felt to hear that as Champion.

“They can’t [ruin it for me]. I feel like it is a testament to my hard work and a testament to the Performance Center as well- everything that I learned here. It doesn’t matter- and I don’t want to mean it in a disrespectful way like ‘I don’t care what the fans think.’ It’s not about that, but I feel like I know how hard I worked to get there, so that’s all that really matters. I won Money in the Bank twice and then I cashed it in to become Champion. I was Champion. No-one can ever take that away from me. My name will always go down in history as the first Miss Money in the Bank. It’s so cool!”

.Roberts asks the SmackDown Live Superstar if she misses working with Ellsworth, now that he is no longer employed by the company.

“Who? Uhhh… *laughs.* It was so cool. I mean, I’ve been saying it’s just really cool. I feel very fortunate to have had the career path that I’ve have. I started out as a manager for Enzo and Cass, drafted to SmackDown Live and did my own thing for a bit and then I had James. Then I was on my own as the Champ, and now I get to be with R-Truth. I feel like I have this really cool journey that I get to show all these different sides to Carmella.”

On a very different note, the reactions when she joined R-Truth soon after were completely different.

“It’s so weird! I’m not doing anything different. I’m still Carmella. But it’s like, I’ll take it. I’m having a blast. I get to rap now, I’m a rapper now, did you know that? Yeah, I’m a rapper- by trade. Well now, yeah, I’m gonna drop an album, it’s gonna be really dope. Elias has nothing on me.”

A hot topic of discussion right now is Lynch as SmackDown Women’s Champion. Carmella explains why she feels the character is justified to react the way she has been.

“No, but Becky is so justified in everything she has done. That is why she is getting cheered. People are like, ‘no, that’s not fair! Becky has been screwed over time after time after time for years now.’ So then she has now finally had enough- everyone can relate to that.”

At SummerSlam, Carmella dropped the Championship to Charlotte Flair in a triple threat also involving Lynch, which is where the Lynch turn happened. People appear to be overlooking Carmella’s presence in the match, and Carmella sought to comment on that.

Finally, Carmella gave an insight into her goals going forward, throwing in a bit of humor in the process.

“For me, it is constantly trying to improve and do the best I can. I can joke around and say I look and do the best, but honestly, I just feel like whatever situation I’m in I want to do the best at it and keep improving. Like, I was the Champion once. I want to be Champion again! I wanna be the best rapper for R-Truth. I wanna be the best at what I can do, and I continue to just- people can hate on me or [be] down on me, whatever they want. I just know I’m working really hard and trying my best.”

You can watch the full interview below:

Do you like Carmella as a competitor? How do you predict the next year of her career will go? Let us know your thoughts, opinions, and reactions in those comments below.