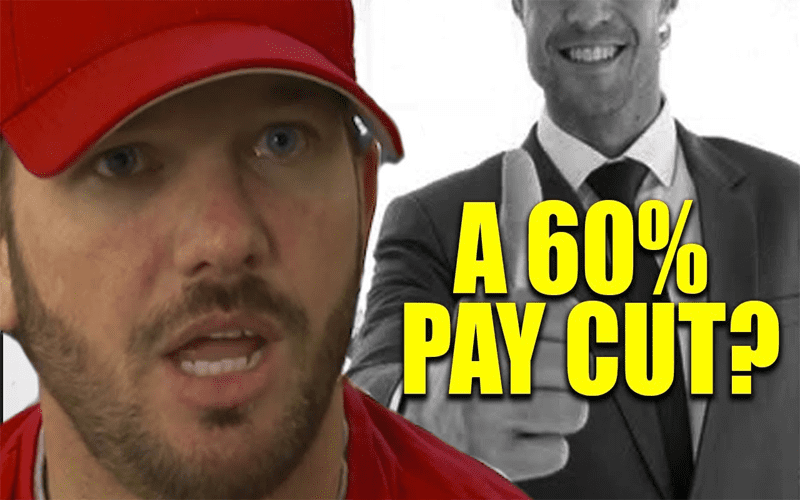 AJ Styles built more than just the house that is SmackDown Live. The current WWE Champion worked in Impact Wrestling- formerly known as TNA for 11 years. He became a star through his time there, and many fans and journalists never expected the Superstar to leave…but he did.

Styles left TNA and went to the independent circuit to face competitors all around the world, while also joining New Japan Pro Wrestling. While Styles wasn’t in Japan for an excessive amount of time, his impact is still remembered today.

He debuted in WWE at the Royal Rumble in 2016 and is now one of the highest-paid Superstars in the company. He is a multi-time Champion and is on the cover of the upcoming WWE 2K19 video game.

Styles was interviewed by Title Match Wrestling. In the shoot interview, Styles explains whether there is any truth to the idea that TNA offered to pay him 60% less than his previous contract when signing him again.

“I think that bit- saying 60% is being generous, to be honest with you. It’s kinda crazy when that is the first offer, like ‘wait, what? That doesn’t make any sense. I’ve worked here for 11 years, and hard for 11 years. I haven’t gotten less popular here at TNA. I’ve been more popular, especially the last year. So I don’t know what’s going on. This doesn’t make sense to me.'”

The current WWE Champion was asked whether he feels it is fair for talent to be treated so disrespectfully by management when the whole debacle occurred because of a deal the company tried to make with Hulk Hogan.

“Not fair to the talents. Somewhere, they wasted a lot of money. The guys under contract- the guys who busted the bud are the ones that have to pay the price and that doesn’t make sense. That is not fair to them. They’re the ones who put their bodies on the line for TNA and took up for TNA on a regular basis. To punish them because of your mistakes is a terrible thing.”

In a massive, lengthy response, Styles explains why he didn’t stick with TNA and take a smaller deal to remain faithful to the company. According to “The Phenomenal One,” being a father and husband is his number one priority, and staying with TNA when the company was in such a bad financial position would do nothing but make things difficult for him. He didn’t want to repeat the mistakes his parents made, and he knows his worth.

“I’ve been a company guy for 11 years. That is exactly who I’ve been. I’ve always protected and took up for TNA. I’ve been that guy. I’m in the final years of my career- the prime of my career. I’ve learned so much and I might’ve delivered exactly what they want better now than ever. When it comes right down to it, this is what I do for a living. This is what I use to support my family. So because they want me to take a [lower] paycheck so I can be a TNA guy- that doesn’t concern me right now. I’m a family man, that’s my job. My job is to take care of them.
“You don’t know how much I’ve made or how less I’ve made. If you’re going to take a pay cut at your job, I’ll take a pay cut at my job. But think about that, because you’ve got mouths to feed. Everybody thinks we make these millions of dollars, but that’s not how it works. That’s not what we do. The fact of the reality is that you’ve gotta pay your agent; you’ve gotta pay to be on the road. All these things come into play in that you have to pay your own taxes. The reality is that it’s never as much as people think. I’m not about to take a pay cut after everything I’ve done- all the blood, all the sweat and all the tears- that’s a reality. That’s a fact- that I’ve done in that TNA ring, and I’m not about to take a pay cut. Now I didn’t say that I wouldn’t make the same thing I would’ve made- ’cause if they would’ve offered me that, I definitely- I would’ve taken it. But that isn’t even close to what they came to, so who are they to tell me what I’m supposed to make?
“You’ve got no idea what I’ve been through the past 11 years. I’ve been down the rollercoaster, you know? Up and down- and I’ve put up with it for [a] very long [time]. I am mature enough in my career and in who I am to not be pushed around; not be bullied and take a lesser pay because I’ve worked hard and because you’ve made a mistake- because TNA mismanaged their money and I have to pay the price. That’s not how it works. I will not take a backhanded slap like that.
“I know who I am as a professional wrestler and I am successful with what I’ve done, no matter what anybody thinks. You know, being successful means I get the opportunity to pay off my house. I think that’s a pretty big thing in my life because I didn’t have what my parents- my parents didn’t have what I’ve had. I’ve done something better than them. That to me is [what] being successful [means.] You know, [I] grew up in the trailer park. You’d better believe it. I’ve learned from my parents’ mistakes. You can either follow in their footsteps or learn from their mistakes- and that is what I’ve done. I’m successful because of it.”

Finally, Styles reveals if he feels responsible for other TNA talent leaving to consider other options.

“You know, I hope that I’m opening a door- that they will see that there is hope for us on the independents. There is hope to go somewhere else. You are not bound by not [being in] TNA or WWE. We can go somewhere and we can make money. That’s not what it’s all about. It’s not all about making money. It’s about making a company, but if you can help make a company- if you can make something special, that’s what it’s all about. The money will come with that. This is what we do for a living, so we have to do it to the best of our abilities. I’m not going out on these independents and melling it in. I’ve got work to do, and I take pride in what I do. There are a lot of other guys that do the same thing and there’s a lot of other companies that will get the benefit if TNA tries to screw them.”

You can watch the video interview with Styles below if you are interested:

Do you think Styles was right to walk away? Are you glad he did, looking back on it? Let us know your thoughts, opinions, and reaction in the comments below.