Ryback opens today’s show by discussing the news that SummerSlam will be travelling to Toronto, Canada in 2019. Ryback notes that cities bid for these big WWE events because they bring a lot of people and money into the local economy. He thinks it’s great that Canadian fans will have the opportunity to see this event on their own soil next year.

News broke this past week that Roman Reigns has overtaken John Cena as the top merchandise seller in WWE. Ryback notes that there have been multiple people who could have overtaken Cena as the top merchandise seller over the years if WWE would have allowed them to, but Reigns is the guy who they want in that position so that’s great for Reigns and his family.

He notes that Reigns appeals to kids and families because he’s been positioned that way. Reigns has a good look for that role and he’s done a tremendous job with the opportunity, and Ryback is happy for him because he’s a great guy. 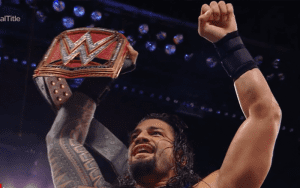 It appears that Rey Mysterio is nearing a WWE return, and Ryback is excited to see him return. He notes that Mysterio is a major superstar anywhere he goes, and he’s sure the fans will love to see him back in WWE. He’s not sure if Mysterio will work a limited schedule or if he’ll return full time for a while, but Ryback’s sure WWE will be able to make money with him regardless.

An online troll took a shot at Tyler Breeze this past week, saying that if Velveteen Dream gets called up to the main roster he’ll turn into Tyler Breeze at best. Breeze responded to this fan by pointing out that he’s made a great living for him and his family over the past 8 years, and just because he’s not booked to win wrestling matches that doesn’t mean he’s a failure.

Ryback points out that this fan is so out of touch with reality and is clearly uneducated in this field. Ryback thought Breeze’s reply in this case was positive and professional.