Garcia mentions that Moon has been working to become a professional wrestler since 2007. She advanced through WWE’s ranks rather quickly, debuting at a Takeover PPV just one year after her signing. She progressed rapidly in NXT, and was called up to the main roster the Monday after WrestleMania this past year. She informs that she found out that she was getting called up the Saturday before WrestleMania, and she didn’t even tell her parents the good news because she knew they wouldn’t be able to keep the secret.

Moon mentions that she takes her job very seriously and she rarely lets her guard down, but when she heard her music play for the first time on Monday Night Raw she was very happy. It was at that moment that she realized she had made it, as that moment signified the beginning of her career in WWE. 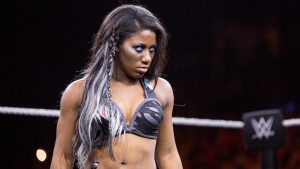 Moon informs that she was bullied as a child in school. Wrestling became an outlet for her and gave her something to look forward to throughout the week, even though she was suffering in school and was even scared to go from time to time. She points out that she had some scary thoughts at that time, and even though she doesn’t think she would have been able to go through with hurting herself, she just wanted the pain to stop.

Moon says that she watched wrestling with her grandfather when she was a child. When he passed away years later it really hit her hard. She had a tremendous relationship with him, and she admits that she wasn’t sure if she’d ever be able to be happy again with him no longer living.