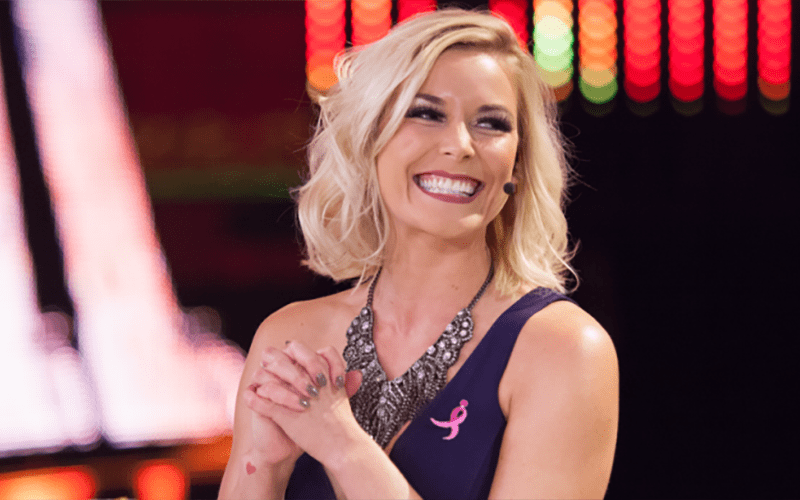 On the most recent episode of Busted Open Radio, WWE reporter and first ever woman to commentate an entire episode of Monday Night Raw Renee Young called in to discuss her historic broadcast this past week. Young was extremely grateful to have had the opportunity, but admits that she was so focused in the moment that she barely had time to soak it in.

All I could think of afterward, and not even afterward — like during — you know like when you’re in the process of something happening and you don’t get to absorb it all? I mean I guess during a three-hour show you do get a moment to absorb it, but all I could think was, ‘man I want to keep doing this.’

“It felt like so much fun, it just felt right. It felt right to me, and I loved that. It was great.

Mark Henry insisted that the commentary table may have to add an extra microphone so Renne could continue to join them. This made Young very happy and admits that would be her biggest wish.

I hope so! Oh my gosh, I would be so happy if that was the case.

Renee then compared her recent performance on Raw to the early days of working in NXT.

Definitely having reps under my belt of doing the kickoff shows and pre-show and post shows I think I did have such a better grasp now from when I did commentary years ago in NXT when I was so new working in this company. I really didn’t know what I was doing. Where now I’ve been able to get in more reps in at the booth in the Performance Center and the kickoff shows and everything I just have a better idea this time around on keeping my voice down and trying not to get too geeked out about the whole thing.

Check out the full segment on here.

(H/T to WrestlingInc for the above quotes)