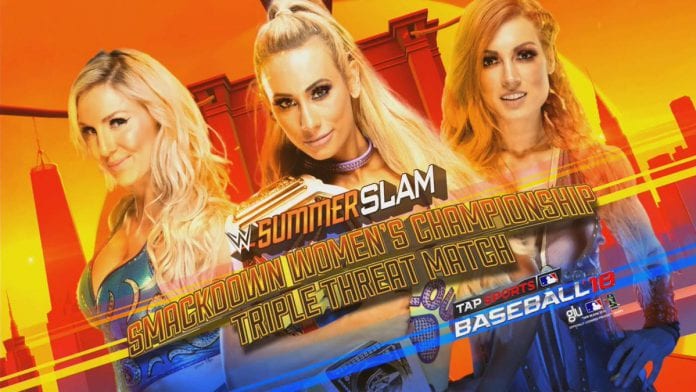 It was recently confirmed through SmackDown Live that Carmella would be defending her SmackDown Women’s Championship against both Becky Lynch and Charlotte Flair after both women successfully defeated her on the show.

During a media conference call to hype up SummerSlam this Sunday, Lynch was asked several questions by Akhilesh Gannavarapu of Wrestling Inc.

One of the big questions fans have been asking is how Lynch is dealing with the addition of her best friend in Flair being added to the SummerSlam match. When asked whether this bothered her, Lynch had the following comments:

“Yeah, of course it does. Of course it does, I’m not going to be happy about it. Friendship and everything aside, it has been something that I’ve been working for my entire life, and it’s something I’ve been focusing on, and I’ve been on a winning streak and a hot streak, and there was nobody that could beat me. I feel like it’s a testament to my mindset, and my work, and of course when you get a spanner thrown in the works, it is going to irritate you.

“But it’s just more of a setback that I’m now used to, to climb the mountain. To overcome obstacles, it has been (that way) my whole career. Nothing comes easy for me, but that’s what makes every victory that bit sweeter.”

It remains to be seen what happens at SummerSlam, but there is an ongoing rumor that one of the two friends will ultimately turn heel within the match, likely allowing Carmella to retain the Championship.

Who do you believe will walk out victorious? Do you understand where Lynch is coming from? Sound off in the comments below.