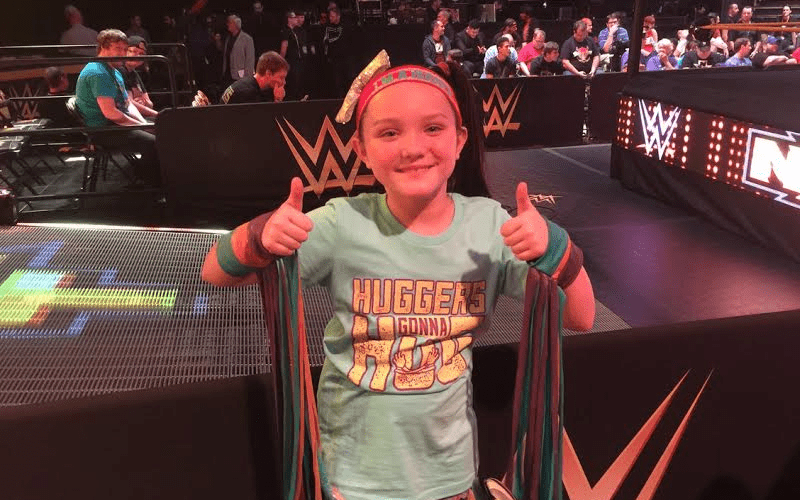 I recently had a phone interview with Bayley’s biggest fan Izzy for the podcast Perched On The Top Rope. Below are the highlights from the interview.

Why she’s a big fan of Bayley:

“I just loved her energy when she would come out. I loved how she would make me smile. I’d get so happy and I would see other people get really happy and I’m like this is my Macho Man for her.

It started when one day she took a picture with me at the guardrail and said this is why I love what I do. She gave me her headband and we just hit it off. Bayley inspired me to be a wrestler.”

Bayley vs Sasha Banks Ironwomen’s match when Sasha made her cry:

“I don’t know why I cried. Maybe when Sasha took my headband  I thought she was going to break it. There was a lot of emotions going on. Banks was yelling at me, “I’m doing this because of you, what are you going to do?” I think it’ll be an awesome story for when I get to WWE and say Sasha Banks stole my headband.

I think it was an important part that told that told the story. It made it better and like here’s an extra push to the crowd and the fans that love Bayley, and the fans that love Sasha. Fan’s were chanting “Slap her Izzy.” That was the best part. It just really helped the match more, not because I was part of it. If they had someone else I’d be saying this. That moment is forever remembered by NXT fans and NXT Alumni.”

Izzy stated that part of the match was not a work. A rumor went around that her parents knew it was going to happen but Izzy’s Father Cody stated that he nor his wife knew that Banks would do what she did to their daughter. “My Mom took off her earrings and wanted to get Sasha.

My Dad was just holding me because he did not know what to do. Thanks, Dad for holding me. It was actually a cool moment because we were sitting next to Bayley’s Dad and Step-Mom. Bayley’s Dad actually handed me to my Dad when I was crying.

“It was such an exciting moment for me because it’s something that’s a huge step up the women are taking now.  It’s not The Royal Rumble, it’s not the Elimination Chamber, it’s not Hell In A Cell, it’s their own pay per view. It’s their time to shine. I knew there was a rumor of women’s tag team titles but I wasn’t excited for that. I want to see all women’s pay per view, and I love watching women’s wrestling. I’m just so excited finally see it happen.”

You can listen to the audio from the interview below.