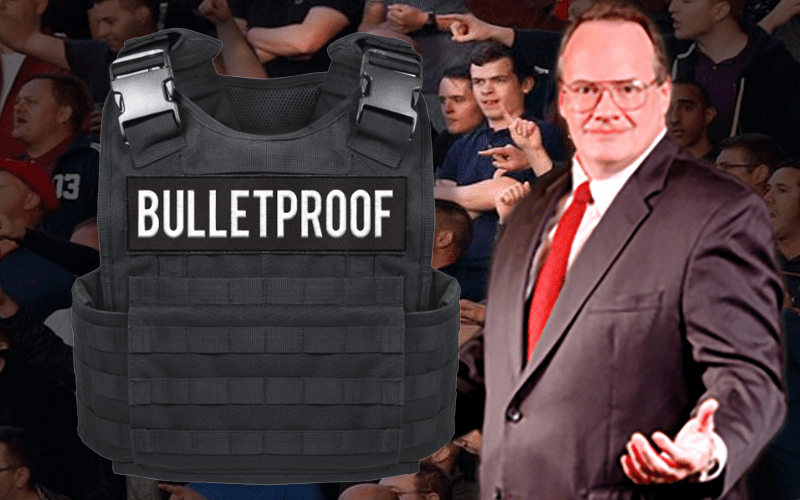 Over the course of his lengthy career, Jim Cornette hasn’t always been a fan favorite. In fact, many times Cornette has found himself under intense heat by the fans.

During Jim Cornette’s Drive-Thru, Cornette discussed working Mid-South Wrestling in the 1980’s with the Midnight Express. According to Cornette, he had to have extra protection while in Little Rock, Arkansas due to the heat he was under.

“In Little Rock Arkansas, and this was early in the Mid-South run so probably spring time. The Little Rock Police Department did security for the matches at the Barten Collisium. They had apparently just gotten new bulletproof vests in, provided to them through the department.”

Cornette honed in on the point that good security was practically essential in those days.

“It was the same cops especially on the heel side all the time. Because the promoters liked to use the same guys because they were loyal to them and they overlooked certain things that may happen because they were getting a payoff for being there. At the same time, they knew how to watch the fans and protect the heels. It was beneficial all around in your regular towns to have the same crew. Especially when they’re legitimate police officers and can take people to jail. It’s nice that the wrestlers always had them on their side.

“One of the cops that always walked us out and this was the place where when I was coming back from the ring someone vomited on my leg. This is the place where they called in the death threat to [Ted] DiBiase. They were gonna shoot him and that was the night when I was in the [shark] cage over the ring and I was a sitting duck.”

Cornette explained the method to transport wrestlers and personnel to and from the ring while in Little Rock. This was rather different than other places.

“Little Rock was a tough place and usually we would get eight of the uniformed police officers and they would form somewhat of a circle around us. Other places, they’d walk ya — they’d get in front of ya and in back of ya but you’re walking down an aisle so your sides are open. Here in Little Rock, they kept the aisles a little bit wider down the middle of the seats.

“A lot of times coming back from the ring [in Little Rock], my dedicated, designated policeman was this guy that was like six-three but he had to weigh four-hundred pounds. He’s in one of the biggest goddamn police uniforms you’ve ever seen, biggest gunbelt and everything you’ve ever seen in your life.

“What he would do, after a match when [the crowd was] really hot, a couple of the cops would get in front, a couple on the side, a couple behind Bobby and Dennis and me in the middle but he would bearhug me and walk backwards down the aisle looking over my back because he was so wide that nobody could get to my front because he was in front of me. He could watch my back as he was backing me down the aisle with his arms around me.”

Cornette revealed that he was given a bulletproof vest by a police officer to take down to the ring with him while in Little Rock.

“This how f–king prepared this exit got in Little Rock. People now think, ‘what the f–k are you talking about?’ They were trying to get us. So one of the cops comes in one night and says, ‘hey we just got new bulletproof vests and I brought my old one because I think you might should use it.’

“Because when’s the last time a city police officer told you that you should wear a bulletproof vest in any instance, right? So that got my attention automatically. Then he said, ‘I don’t know if we have to worry about you getting shot at, but this is also useful for knives. It will keep you from getting cut or stabbed.’ I said, ‘oh, that’s good to know.’ Then he said, ‘but it won’t stop an icepick.’

“So he’s really pepping me up for this, then he gives me the goddamn thing, right? I mean this is what they’re telling me. People wonder why I was conflicted a time or two about whether I should quit the f–king business at ringside down there or not.

“Anyway, so I started wearing [the bulletproof vest] in a couple of places: Tulsa, Little Rock when we expected to have an issue and maybe once or twice in another town when it looked sketchy. Maybe a spot show or something where it looked like we couldn’t trust the cops being on our side.”

Finally, Cornette described how he would put on the vest, given that he didn’t want to reveal it to any of the wrestlers in case they made fun of him.

“I didn’t wanna telegraph cause then the boys will make fun of me. So what I would do is I’d go in the bathroom and I’d take my jacket and my shirt off real quick and I’d put the bulletproof vest on and then put my shirt on over top of it buttoned up which is what the cops do. They’re wearing it underneath their s–t, right?

“Then I’d put the jacket on and you couldn’t really tell I had it. A couple of times when the babyfaces hit me with body shots they were like, ‘what the f–k? He’s harder than we thought he was!’

“It made me feel a little bit better. You know I’m thinking okay if nobody shoots me directly in the head or brings an icepick I should be alright. By the end of the year, it had outlived its usefulness.”

Can you understand Cornette using a bulletproof vest, or feel it was too much? What is your reaction to this? Sound off in the comments below.