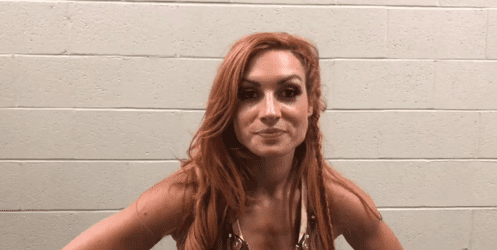 The Irish-Lass Kicker has had quite an up and down run on the main roster. She was the first ever SmackDown Women’s champion but was unavailable to perform due to a slight injury in the early days of her reign, and dropped the belt to Alexa Bliss in her first PPV defense. Since then Becky has remained quite distant from the top of the women’s division, missing out on multiple title opportunities and stacking up enough losses to make her seem quite incapable. However, throughout that rough patch, the WWE Universe still stayed behind Becky Balboa, waiting for the day that their Irish hero would somehow achieve greatness once again.

Well…it may be coming. Becky fell just short at Money in the Bank, but she was able to string together a slew of victories which placed her in an all important non-title matchup against Carmella last week on SmackDown. Becky would submit the champ, and earn herself a shot at gold at SummerSlam.

Last night, after her victory on the WWE tour through Hershey Pennsylvania, Lynch took to Twitter to exclaim how important this title match is at this point in her life.

I think a lot of people have been saying that I don’t win where it counts the most, and that’s been true, and that’s a fact that has really hit home to me in the last year and really hurt me. But more than any of that it’s driven me further and harder than any amount of victories ever would. I am more determined, more tunnel vision, and more focused than I have ever been. I don’t just want this, I need this, and I know that. And I know that I have so many great, amazing fans that have supported me this whole time, win, lose, draw. I need to prove them right, and I need to make them proud.

After picking up a victory at #WWEHershey, @BeckyLynchWWE is looking to make her fans proud at #SummerSlam! pic.twitter.com/7YQAucY0DF