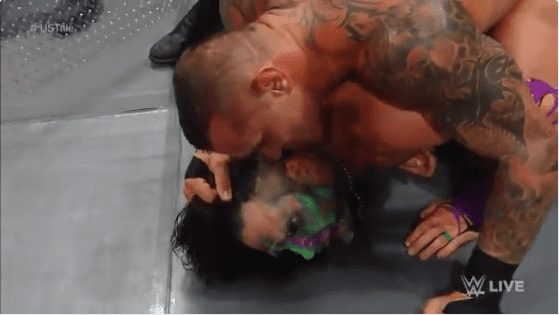 As seen on Tonight’s episode of SmackDown Live, Randy Orton destroyed Jeff Hardy after interfering during Hardy’s United States title rematch against Shinsuke Nakamura. Orton put Hardy through all kinds of punishments and even went as far as to threaten and tear apart Hardy’s earlobe.

Orton whispered some words in Hardy’s ears during the vicious beat down. It was quite inaudible during the show, therefore, WWE reuploaded the video of this incident on their Twitter.

You know why I am doing this? You want to know why? You’re gonna have to wait to find out.

After saying this, Orton continued to stretch Hardy’s earlobe. He again said the same words before the officials tried to stop him from inflicting more punishment onto Hardy.