Edge and Christian open today’s show by speaking about the great work that Dolph Ziggler, Seth Rollins and Drew McIntyre have been doing on RAW the last few weeks. Edge notes that McIntyre is looking like a killing machine right now, and he’s really happy to see that Ziggler is getting another chance to be a big-time player because he’s one of the best in the business.

Christian is looking forward to the 30-minute Iron Man match between Ziggler and Rollins at Extreme Rules as he’s sure those guys will deliver. He informs that when he was working for WWE’s ECW brand, he made a strong pitch to do a match for an entire one-hour show with Jack Swagger. He notes that he almost had WWE officials convinced to let them do it, but it didn’t pan out. 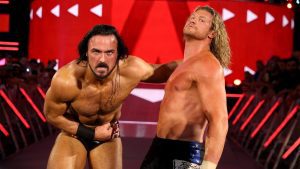 A listener writes into the show and asks the guys to name their favourite singles and tag team finishers of all time. Christian notes that Jake Roberts’ DDT is classic, and Edge agrees entirely. Edge adds that Jerry Lawler’s Piledriver was fantastic and Undertaker’s “Tombstone” variation was great as well. As far as tag team finishers go, they both agree that Legion of Doom’s Doomsday Device was incredible. They also mention The Hart Foundation’s Hart Attack, and the British Bulldog’s Flying Headbutt from the top rope.

Another listener writes into the show and asks Edge if he watched the entire show leading up to his WrestleMania main event match against The Undertaker. Edge informs that he didn’t watch the show backstage because he thought that would result in him putting more pressure on himself. He knew he was going to tell a great story with Undertaker and they were going to deliver in the main event, but he didn’t need any added pressure in those final moments leading up to the match.