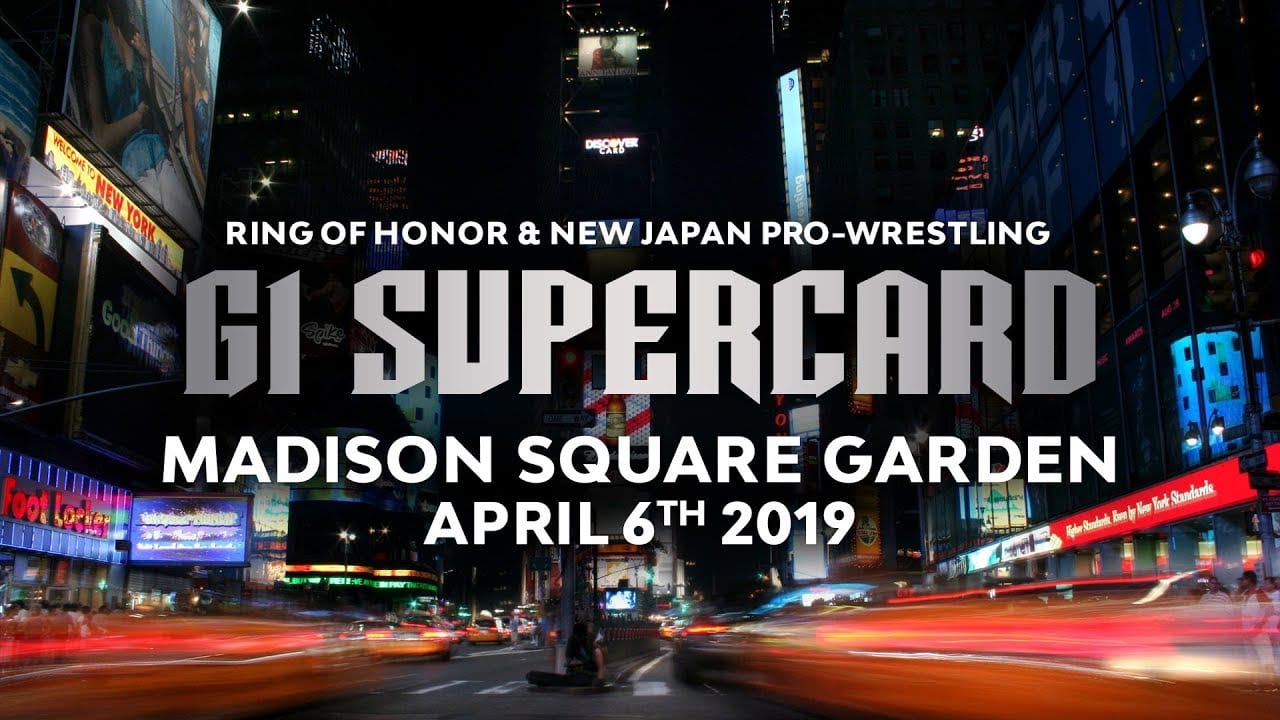 Ring of Honor announced that they will be holding a joint show with NJPW called G1 Supercard at Madison Square Garden during WrestleMania weekend on Saturday, April 6, 2019.

You can check out the announcement below.

ROH/NJPW PRESENT “G1 SUPERCARD” – LIVE FROM MADISON SQUARE GARDEN!
Baltimore, MD [07/12/18] – For 16 years, Ring of Honor Wrestling has created some of the top stars in professional wrestling, and for nearly 50 years, New Japan Pro-Wrestling has brought Japanese Strong Style to the world. Together, these two companies have delivered world class shows such as “War of the Worlds,” “Strong Style Evolved,” “Global Wars,” “Honor Rising,” and the “G1 Special,” which NJPW has launched as a special kickoff in the United States to their annual “G1 Climax,” known as one of the most elite tournaments in professional wrestling.

ROH and NJPW are proud to announce that on April 6th, 2019, the companies will join forces to present the ultimate wrestling event, “G1 Supercard,” to fans from around the world, LIVE from Madison Square Garden in New York City!

“Three years ago, one of our best fans told me in confidence that Supercard of Honor just didn’t feel “super” anymore, said Greg Gilleland, ROH General Manager. “He was right and we took that to heart with the huge events we delivered in Lakeland, FL in 2017, and New Orleans, LA just a few months ago. With consecutive record breaking attendances, the question became, how can we top that in 2019? More importantly, how can we give the fans more of what they want and what they deserve? The G1 Supercard is an event that can only represent the absolute best possible matches with both NJPW and ROH stars, and Madison Square Garden is the perfect venue for them.”

“This is a historic initiative for ROH and New Japan Pro-Wrestling,” Harold Meij, President of NJPW proudly commented. “This gives us a great chance to expose fans to NJPW in the building which housed so many memorable and compelling matches.”

Already confirmed for this show from NJPW are Kazuchika Okada, Hiroshi Tanahashi, and Tetsuya Naito, in addition to all of the top ROH Stars. This show is set to be massive in magnitude including many matches to be announced with championships from both companies defended. Fans will not want to miss this marquee event at a venue with such an amazing storied history of wrestling.

“We are thrilled to welcome Ring of Honor Wrestling and New Japan Pro-Wrestling to Madison Square Garden for the much anticipated G1 Supercard,” said Joel Fisher, Executive Vice President, MSG Marquee Events. “We expect April 6th to be another memorable night of wrestling at The World’s Most Famous Arena.”

ROH Chief Operating Officer Joe Koff is equally proud. “This is destined to join a long list of historical wrestling moments and where better to hold it than at Madison Square Garden. I am extremely proud of what we have been able to achieve as a company and am very appreciative of how great our relationship with New Japan Pro-Wrestling has become. However, none of this would be possible without our fans, who are truly the best in the world. Madison Square Garden would not be possible without them and for that I am most grateful.”

G1 Supercard is sure to be a historical event in New York City that promises to exceed all expectations.

Tickets will go on-sale on Wednesday, August 8th at 10:00 AM ET for HonorClub members and Friday, August 10th for the General Public.

Stay tuned to ROHWrestling.com for more information on G1 Supercard and other important Ring of Honor Wrestling news. Visit NJPW1972.com to follow your favorite NJPW wrestlers and for any other NJPW news or event information.